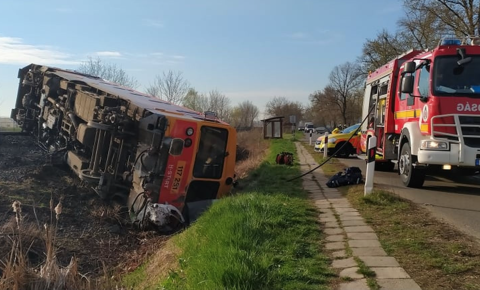 A collision between a passenger train and a pick-up truck in Hungary on Tuesday morning left several dead and at least 11 injured, railway company MAV and the Hungarian police report.

The incident happened at around 05.50 local time in the Hungarian country side near the town of Mindszent. According to MAV, the truck came onto the tracks despite functioning barriers. The impact was such that the train completely derailed and flipped over.

At the time, the train was carrying 22 passengers. Various media reports list at least five dead, while Hungarian authorities mention ‘several’ fatalities. Of the 11 injured, two are said to be in serious condition. The police is on site for the investigation.

Following inspections, the train car will be lifted back on the tracks by crane. The operation is expected to take several hours, and railway traffic between Hódmezővásárhely to Kiskunfélegyháza will likely remain suspended until Wednesday, MAV writes.