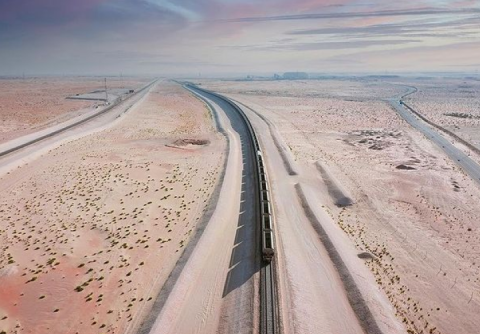 Wealthy, modern and prospering: three things that most would agree apply to the United Arab Emirates (UAE). Yet a railway network is absent, save for the metro and tram in Dubai. But that is all about to change.

Earlier this year, a Dutch adventurer raised eyebrows by travelling from Amsterdam to the United Arab Emirates (UAE) and back, mostly via rail. But whereas neighbouring and nearby countries such Iran and Saudi Arabia have rail networks for train services, the UAE is somewhat lacking in that regard.

To be fair, Dubai of course has its 75 kilometres of metro lines, a monorail and tramway. Abu Dhabi, meanwhile, has a 131-kilometre metro network in the works. But for a country of its size – the surface area of UAE is comparable to that of the Benelux area in Europe – regular train services are not only feasible but desirable.

Steps have already been made when it comes to rail freight. Etihad Rail’s freight services are now in their seventh year. The company shuttles between the Shah gas field on the border with Saudi Arabia and the Ruwais industrial city along a dedicated, 264-kilometre freight line.

Work on stage two of the UAEs’ rail freight project began in 2018 and links Al Ghuwaifat to Fujairah, covering a distance of more than 600 kilometres. September 2021 saw the completion of stage two’s construction package A, which connects Al Ghuwaifat and Ruwais. At the beginning of March this year, Abu Dhabi and Dubai were linked up. On Thursday, Etihad Rail and the management of logistics hub Dubai Industrial City (DIC) announced the development of a freight terminal covering more than 500,000 square metres.

Once construction packages B through D are complete, the Etihad Rail network will encompass 1,200 kilometres of tracks. The overall work is now 70 percent complete.

The various railway works are consolidated under the banner of the UAE Railways Program launched in December of last year. It is one of the country’s Projects of the 50, designed to accelerate the UAE’s development. The projects range from revised visa schemes and local employment opportunities to railways and an Emirate space mission.

The UAE Railways Program comprises Etihad Rail, a proposed passenger service and, thirdly, a future network of lightrail. The Program is valued at 50 billion emirate dirham (12,25 billion euros) and calls for 200-kilometre-per-hour passenger services between the country’s main cities. As a result, travel time between Abu Dhabi and Dubai should be reduced to 50 minutes.

The country is targeting an annual passenger number across the network of 36,5 million by 2030. By that time, the railway sector should support more than 9,000 jobs in the UEA. In February, Eithad Rail secured close to 2 billion dirham in financing for the proposed passenger services.

As mentioned, the third project to be carried out under the UAE Railways Program is the rollout of a lightrail network. This work will be carried out as part of the Integrated Transportation Service project, which also includes planning and booking tools, as well as smart ticketing solutions. The light rail network will help move train passengers across the cities upon arrival, Etihad Rail says.