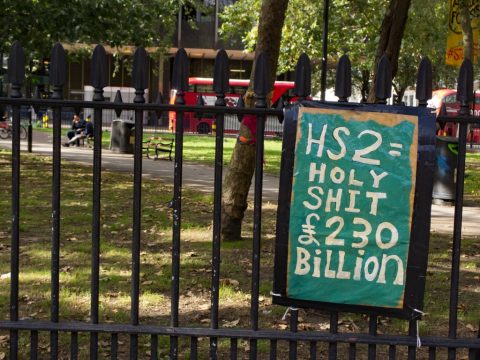 Protests against HS2 have cost project more than 120 million pounds

The various anti-HS2 protests have costs the railway project just shy of 122 million pounds (145,9 million euros), Minister of State at the Department for Transport Andrew Stephenson said in Parliament earlier this month.

Delays to the programme and the removal of illegal protestor campsites make up a large chunk of the costs, which have increased from 42 million pounds since Stephenson’s last briefing of Parliament. While protestor activity is now limited, it has not disappeared altogether, he added.

Stephenson mentions the illegal Wendover protest site specifically, where anti-HS2 protestors first gathered in January 2020 to raise their voices against the destruction of woodlands. The protestor site was removed late last year.

According to the minister of State, the project’s community engagement strategy has now been “refreshed”, and added that the the Community and Environment Fund and the Business and Local Economy Fund have already supported 192 projects.

Phase One from London to West Midlands remains on track for delivery into service some time between 2029 and 2033. Phase 2a will be delivered between 2030 and 2034, while phase 2b is tentatively scheduled for the 2035-2041 window. Stephenson’s next update will follow in the autumn of 2022.

The minister’s briefing more or less coincided with the release of the report High Speed Rail Net Zero Voice by the High Speed Rail Group. While the authors say that there will indeed be environmental disbenefits such as landtake, “measures are also being undertaken to ensure that HS2 has a positive environmental legacy.”

“I was taken in by the claims of the anti-HS2 lobby, as anyone with green credentials will find a phrase like ‘108 ancient woodlands are being destroyed’ very emotive. A lot of the standard soundbites make HS2 sound like a bad thing, but once you start breaking those down you can shed some light on the bigger picture”, says Greens4HS2 member Melanie Horrocks.

Part of that bigger picture is the so-called Green Corridor along the Phase One route, where 7 million new trees will be planted in the restored and enhanced habitats. Some 33 square kilometres of new and existing wildlife habitat will also be created, the report says.