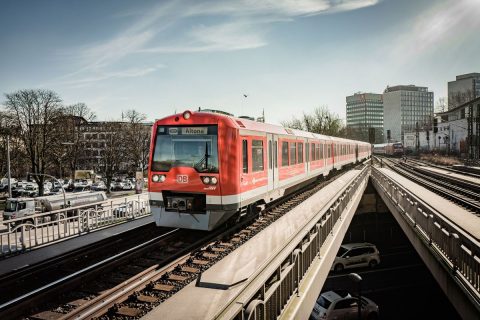 Deutsche Bahn has started preparations for the second test phase of the Sensors4Rail project, which will take place in Hamburg from May this year. The smart sensor technology being trialled on an S-Bahn vehicle should increase the punctuality and safety of rail transport.

A Sensors4Rail test vehicle in the form of a S-Bahn (Stadtschnellbahn) light rail vehicle recently arrived at the Hamburg S-Bahn plant. From there, the second test phase of the smart sensor technology for rail transport will begin.

In addition to the Sensors4Rail test vehicle in Hamburg, the sensors will also be tested on points on the busiest rail routes throughout Germany.

What is innovative about the Sensors4Rail project is that sensors provide trains with accurate information about the environment in which the vehicle is located. A highly accurate digital HD map and modern satellite technology are used to determine the position of vehicles within a centimetre.

In the future, the information provided by the sensors should allow more trains to run simultaneously on a railway track without compromising safety. What’s more: Sensors4Rail should actually make rail traffic a lot safer. The sensors must also learn to detect unwanted projectiles on the track, such as a fallen tree or a person on the track.

The focus of the second test phase, which will start in May, is on further expanding the so-called data diversity. This includes expanding the test area to new routes within the Hamburg S-Bahn network and recording variable data such as weather conditions and day and night rhythms.

The aim of expanding the data diversity is to gain more insight into the performance of the functions under different conditions and track sections. With a repeated training of the neural networks used, Deutsche Bahn hopes to lay a foundation for the further development of the Sensors4Rail system.

Before the test runs of the second test phase can begin, the commissioning of the Sensors4Rail test vehicle will be extensively tested at the S-Bahn plant in Hamburg.

Deutsche Bahn hopes that if the further development of the data diversity in May of this year is successful, the first test runs on Hamburg’s tracks can take place not much later.