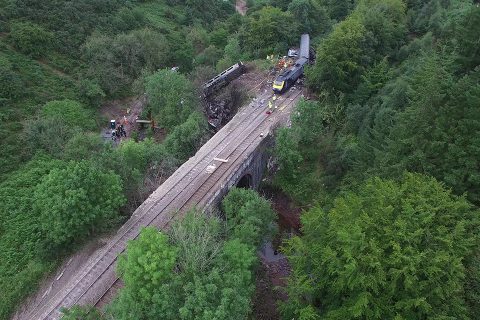 The drainage system at the Carmot accident site in Scotland, where on the morning of August 2020 a train derailment happened that left three dead, was not constructed and installed according to the designers’ requirements, a report by the Rail Accident Investigation Branch (RAIB) has found.

The report published on Thursday also revealed that the contractor, Carillion, had failed to report the differences between the installed drainage system and the original designs by rail engineering firm Arup to Network Rail, which had approved the designs.

“Although Network Rail had a project team, they were not required by Network Rail business processes to check that the drain was being installed in accordance with the design. They therefore relied on a contractual assurance process that required Carillion to refer proposed changes to the designer, Arup, for approval”, the investigators write.

Because the steeply sloping drain was not constructed correctly, heavy rain caused gravel and and cobbles to wash out onto the tracks over a distance of around 10 metres. When the train struck the debris, it derailed. The accident killed the conductor, a train driver and one of the passengers.

While there were reports of a number of flooding incidents and landslips in the area on the same morning, the train driver was not instructed to reduce speed. As a result, the train was driving at just onder the permitted speed of 75 miles per hour (120 kilometres per hour).

The RAIB found that “the Scotland route control team was under severe workload pressure” that morning and that controllers had not been given sufficient guidance or training to enable them to effectively manage complex situations of the type encountered on the morning of 12 August 2020.”

After the accident, a new drainage system was installed with improved capacity. On top of that, guard rails were installed along the tracks. At Scotland’s Railway, a permanently staffed weather desk was introduced.

Finally, the report highlights the death of the driver, and the part that may have been played by enhanced cab safety measures. The RAIB has raised the issue previously, but puts forward the proposal for measures such as seatbelts and airbags to be reconsidered.

Refer to our sister publication RailFreight.com for a more detailed examination of the report.