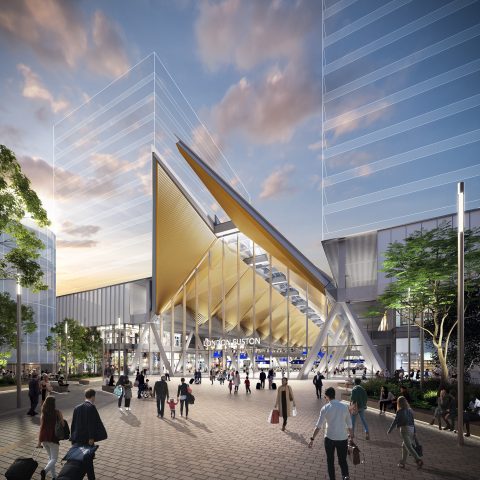 HS2 on Wednesday published new images of the future London Euston station. The updated designs are a marked departure from the ones first released in 2015, as the station can now be built in a single phase as opposed to two.

The new designs for the HS2 London Euston station reveal an entirely different geometric roof design. The roof itself can be largely prefabricated off-site before installation. The current station was constructed in 1968 and replaced the original structure, opened in 1837.

The new station will comprise three levels, with the 300-metre-long ground-level concourse now mainly designed as a north-south route between Euston Road and Bloomsbury to Hampstead Road and Camden Town. To that end, the ten 450-metre-long platforms were moved underground. The concourse will also feature shops and other facilities, as will the station’s first floor.

“The scale of the new HS2 London Euston station means we have the opportunity to create a new truly public civic space for London, a place that responds to transport and passenger needs and becomes part of the existing urban fabric and community”, said Declan McCafferty, Partner at Grimshaw Architects, about the designs. “The 300-metre long station hall sits at the heart of this approach, creating a space that is permeable, accessible and open and connects to the local streets and neighbourhoods through green, pedestrian-oriented spaces.”

The new H2S London Euston station ticket hall provides direct access to Network Rail’s Euston Station and the HS2 platforms, as well as the London Underground stations Euston and Euston Square. This will facilitate seamless connections between the Northern, Victoria, Circle, Hammersmith and City and Metropolitan Lines for commuters on the tube.

The joint venture between construction firms Mace and Dragados, HS2’s construction partner for London’s Euston station, in February announced it would be inviting bids on construction packages with a combined value of more than 500 million pounds (598 million euros). At its peak, the construction effort is expected to support up to 3,000 jobs.

The original plans for Euston Station called for a phased construction effort, with the first six platforms to be delivered in 2026 and a further five by 2033. The new plans call for a less complex stations with ten platforms to be constructed in a single phase.