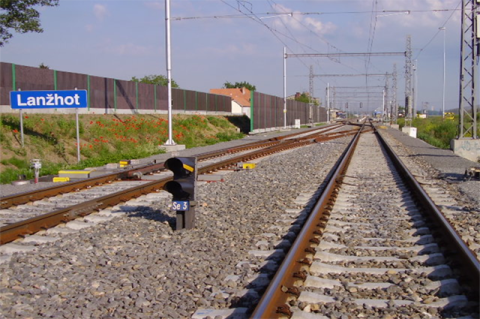 Sweden-based construction group Skanska and the Czech Elektrizace železnic Praha are selected to modernise part of a railway line from Czech Republic to Slovakia. The modernisation of the border section between Lanžhot (Czech Republic) and Kúty (Slovakia) is to ensure interoperability and increase line speed from the current 120 km/h to 160 km/h.

The construction works awarded by Czech infrastructure manager Správa železnic will start this February and will last until the end of next year. The tendered price is 24 million euros (CZK 596 million), and the project will be co-financed by the EU from the Connecting Europe Facility (CEF) programme.

The contract involves the line section Lanžhot and Kúty and covers around 1.5 kilometres from the D2 motorway overpass near Lanžhot to the state border with Slovakia. The reconstruction of the railway substructure and superstructure will be completed on the Czech side before the border bridge. The only level crossing in this section will also undergo a major renewal, the existing crossing structure will be replaced by a new one made of concrete panels on steel girders. The crossing will be secured by a light crossing protection device with barriers to increase safety. The four bridges structures of the section will be replaced by new structures due to inadequate crossing capacity (mainly steel structures).

There are two border-crossing railways between Czech Republic and Slovakia. The section Lanžhot – Kúty is part of the so-called 1st transit corridor of Czech Republic, which runs from Prague to Slovakian capital Bratislava. The other border crossing is more to the north-east, between and Mosty u Jablunkova and Čadca (Slovakia). This is part of the 3rd transit corridor, running West-East Plzeň and Prague to Žilina in Slovakia.

EuroCity trains from Czech operator České Dráhy serve a range cities such as Bratislava, Žilina, Poprad and Košice. The fastest connections between the Czech Republic and Slovakia are provided by SC Pendolino trains of ČD. Slovakian operator ZSSK also cooperates with the  company Wagon Slovakia Košice (WGS) on night trains to Czech Republic.

In the summer of 2021, upgrades on the 3rd transit corridor were completed near Lhotka nad Bečvou station so that the line speed first increased to 155 km/h, while before trains in the direction of Slovakia could go only 80 km/h on the section.