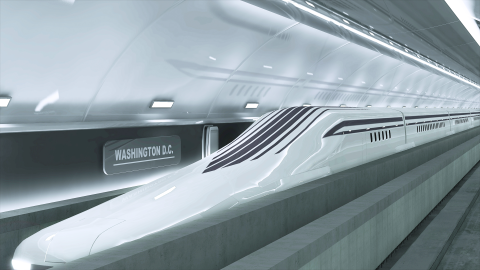 A Maglev train in the US? ‘We need to break the chain of low expectations’

“Building the Maglev is about removing millions of people from their cars and fighting climate change”, says Wayne Rogers, CEO of the Northeast Maglev. The company is planning to build a 500 km/h magnetic levitation railway between Washington DC and New York. 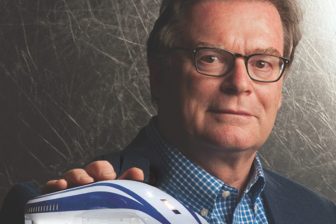 The project to realise the first Maglev train in the United States has quite a run-up, having started in 2011. In short, it is a seperate passenger railway that will connect all centres on the Northeast Corridor. Every 10 minutes, a train will run, covering the distance Washington DC – Baltimore in 15 minutes and from Washington to New York City in an hour. Based on Japanese technology called SCMaglev, it will include a superconducting propulsion system which can go 500 kilometres per hour (311 mph).

“In 1964, Japan said: if we don’t do something now, the traffic will become unmanageable. The Northeast Corridor can be seen as already way past this point”, says Wayne Rogers. The highway between the Washington DC and Baltimore was built for 50.000 cars, now there are 120.000 cars per day, he names. The Northeast Corridor contains 12 percent of all highway miles in the US, and 52 percent of the worst highway bottlenecks. Many people also travel via airplane between the cities, accounting for 30 percent of domestic air trips, and a fast train could mean a great reduction in air and car traffic.

Within the next two years, Rogers expects that the approval for the first phase of the project, from Washington DC to Baltimore can be concluded. This is currently under review by the Federal Railroad Administration. The construction of this stretch would take about 6 to 7 years, so the Maglev train could be a reality around 2030 at its earliest.

Contrary to many regular railway lines, 70 percent of the route will be underground. Building it around 60 or 70 metres deep, the vibrations are deep enough to be unnoticable above ground. For large parts, the only noticeable evidence are periodic emergency egress openings along the route that will be visible above ground. In Washington DC, the station will be below the metro, and there will be a station at Baltimore Washington Thurgood Marshal International Airport.

One of the bottlenecks of the project is the long and extensive process it has to go through. More than 30 agencies have to give approval before construction can start, which does not always go without a hitch. Rogers: “The key is putting a shovel into the ground.”

When a Maglev train would run on the Northeast Corridor, mobility in the region would change drastically. “From Washington to Baltimore, you could go one hour – or often longer with traffic jams – by car, or 15 minutes by train. It will shrink geography.” Every connection in the area would reduce to under an hour, says Rogers. “People from Washington DC could get to New York City (nearly 400 kilometres) within the time it would take by car to Baltimore. Short flights would largely disappear, it would literally change people’s lives.”

One of the points of criticism is that a Maglev train would get in the way of Amtrak, which operates the Acela high-speed trains on the same corridor. “Maglev won’t do away with Amtrak, it will be complimentary”, responds Rogers on that. The Acela trains are currently pretty full, he says. “It is not about competing with other trains, but about how we can remove millions of people from their cars and give them back time and fight climate change.”

In addition to the lower CO2 emissions of rail versus cars, the local pollution would also improve if there is a shift from road to rail. In the Washington / New York Area, 41 percent of air emissions come from cars, says Rogers. Satellite images of NASA show that during 2020, the year with many lockdowns, there is less air pollution. Images during the “during stay-at-home orders” show a drop in pollution, which can be attributed to less motor vehicles on the road.

This is not to say that construction of the maglev will remove the same amount of pollution from the atmosphere as the lockdowns did, notes Rogers, but it shows how much pollution is produced by cars and how air quality can improve when cars are removed from roads. The Northeast Maglev could fill their trains with 11 percent of cars currently on the road, thecompny estimates.

Most people in the region are in favour of building the Maglev. Northeast Maglev has conducted polling among residents of the area, and more than two-third support the train, in all of the counties. “However, we have to work through the process and break the chain in America of low expectations”, says Rogers.

“We have a history in America of doing big things, such as the Hoover dam, but in the past decades, we have become cynical. We put a man on the moon, and in 2022 we couldn’t build a train that already exists in Japan?” That has become an obstacle in realising a project like this. President Johnson came with a high-speed act 1965. But it has never happened, so this is the private sector stepping up.”

Currently, train ridership in the United States is very low compared to other countries. “Some Americans say: I don’t ride a train. We need to change American behaviour.” The main thing that will convince people will be the fast intervals, he thinks. “People want things immediately, we want it right now. Waiting an hour between trains wouldn’t work, so it will run every ten minutes.”

The difference with Hyperloop

In the world of fast trains, the hyperloop is a newcomer which catches much attention. Hyperloop is however a technology that is still in development, “it has not been proven yet”, says Rogers. There have been first tests with passengers last year, but the hyperloop capsule went just around 170 kilometres per hour on the test track. “Maglev on the other hand is a proven technology, which is currently in operation in Japan and China. Japan has spent 15 years on the safety approval.”

While both are ultra fast rail systems and might seem similar, a hyperloop has a totally different experience than regular high-speed rail, says Rogers. “In a hyperloop, you sit in a capsule of around 6 or 8 people, and are strapped in.” Therefore, Maglev is now the best bet. “In a Maglev train you could fit 800 people, and it is a smoother ride than most current trains. You can walk around and have a cup of tea.”