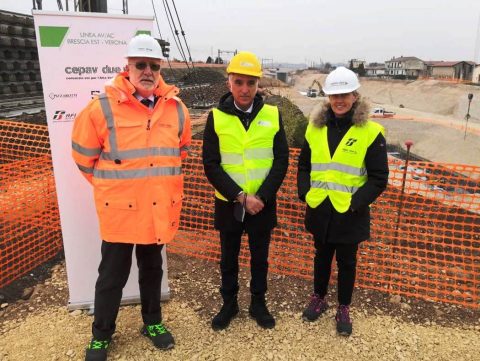 Construction work on the high-speed railway between the Italian cities of Brescia and Padua will gain momentum in 2022, an official of infrastructure manager Rete Ferroviaria Italiana (RFI) said at a stakeholders’ meeting on Tuesday.

According RFI government commissioner and investment director Vincenzo Macello, project expenditure is expected to increase by 53 percent over last year to 460 million euros. Work on the new high-speed line, which will also call at Verona and Vicenza, is now more than 24-percent complete, he added. Construction efforts are now underway at the 6-kilometre Lonato tunnel and the San Giorgio tunnel.

The new high-speed railway will have significant advantages, such as a reduced travel time between the cities on the Brescia-Padua line. It will also free up capacity on the conventional tracks, presenting opportunities for rail freight.

However, Macello also said the construction effort would come at a cost of significant disruptions in the Verona area in the coming years, especially as the the city sits at the Trans-European Transport Network (TEN-t) junction of the North Sea-Baltic corridor and the Mediterranean corridor.

To the east of the city, the high-speel line will get a branch lines towards the Brenner pass and the Verona Quadrante Europa freight terminal. Between Verona and Vicenza, a separate, 44-kilometre-long section will be constructed to the tune of 2,76 billion euros. That project is now 13-percent complete, said Macello.