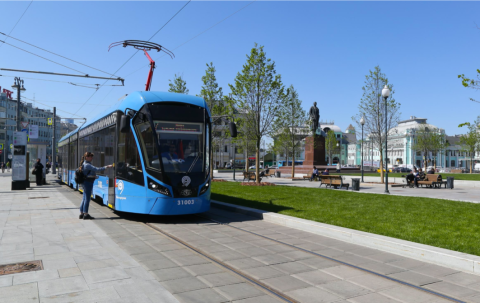 Moscow Transport aims to start a testing programme for driverless trams at the end of this year or the beginning of 2023, deputy mayor Maksim Litsutov told a conference audience this week. The tests will be conducted in cooperation with Russian tech company Yandex.

While the legislative framework for driverless testing is in place, Litsutov cautioned that the actual deployment of trams without driver is still 10 to 15 years away. Part of the difficulty, the deputy mayor explained, is the limited tram headway during rush hours. At times there is a window of only 80 seconds between trams.

“There is as of yet no company in Russia that can offer a solution to ensure such headways in driverless mode. We know that developments are underway, and we are very interested”, he said.

Driverless trams will first be tested in the tram depot, before moving to the second phase that is night testing. Eventually, transport officials want to start test drives with passengers. Which lines will take part remains unclear, but it is likely that it will be one of the lines with segregated tracks.

Moscow Transport is also looking into driverless technology for the Moscow Central Circle. Russian Railways, too, plans to implement the technology at some point in the future, as they work to reduce headway to 3 minutes or less. Testing will begin with a fully automated passenger train halfway through 2023. A train is currently being built by train manufacturers Siemens and Ural Locomotives, and will be equipped with Automatic Train Operation Grade of Automation 4 (GoA4), which allows the unit to run without driver.