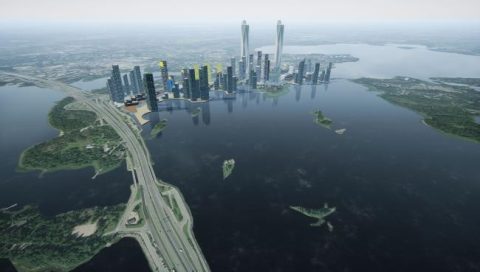 Helsinki-Tallinn tunnel can open up rail in Finland and Estonia: ‘we love competition’

Published on 08-02-2022 at 12:39
Impression of the FinEst Bay Area, which could be jumpstarted by the connecting tunnel Finest Bay Area Development

There is an ambitious plan to build a tunnel from Helsinki to Tallinn. Peter Vesterbacka, COB and founder of the company behind the project and founding partner Kustaa Valtonen talk about the progress of the tunnel and explain the big picture: connecting Finland and the Baltics to Europe and attracting new talent. 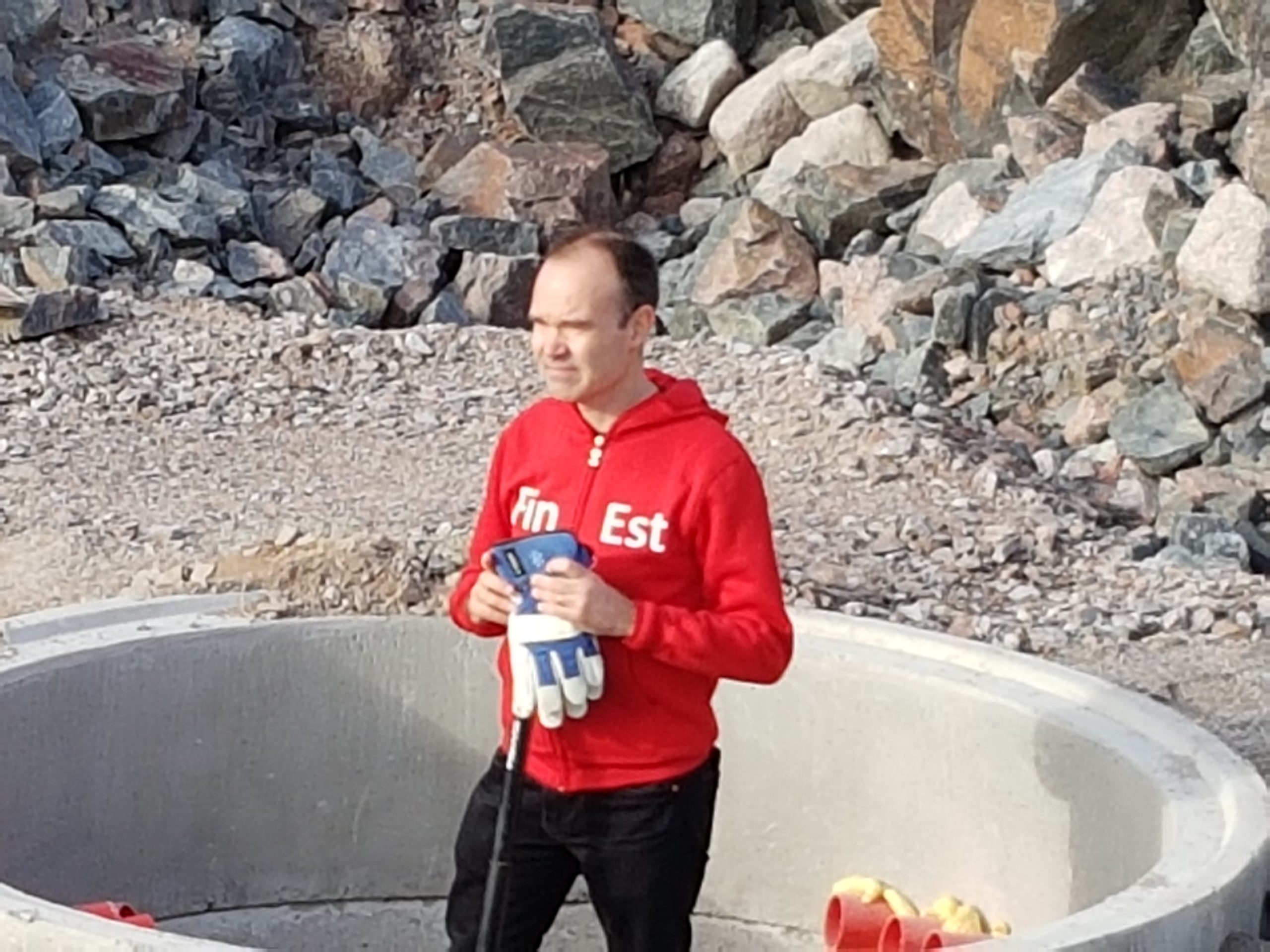 A railway tunnel crossing the sea between Finland and Estonia, reducing the travel time from the current two-hour ferry ride to just 20 minutes by train. That is the plan of the company FinEst Bay Area Development, co-founded by Finnish entrepreneur Peter Vesterbacka (image one the right). “If you look at the status quo, we are dependent on ferries and airplanes. Finland is practically an island”, he says.

The tunnel would not only bring Finland and Estonia closer together, but also remove the ‘island status’ of Finland and connect to Europe via rail. The tunnel is planned to be completed by the end of 2024 – if the approval process goes smoothly.

The tunnel will integrate Finland to the standard European rail network which is brought to the baltic countries with the Rail Baltica project. “Thereby, it also connects to the market in Europe, which is now opening up. With the standard equipment in the tunnel, rail operators can compete with European operators and government monopolies such as Deutsche Bahn”, says Vesterbacka.

By connecting the European standard to the Baltics and Finland, it opens possibilities for more competition. The FinEst Bay Area company is already in talks with rail operators, of which no details yet can be shared. “We love competition, so we want the railway to open up. There is a state owned monopoly in Finland, and more competition would be good to see”, says Vesterbacka. The Estonian railway operator Operail is currently competing in Finland, but only for rail freight.

For the entrepreneurs, the physical tunnel is important, but also to move fast forward with digitalisation, such as implementing the digital train signalling ERTMS. “We need to get our act together in Europe and ultimately get to fully autonomous trains.”

Support for the tunnel

The project for the tunnel of FinEst Bay has been going for about five years. It is no easy matter, with complicated processes. “We have had to deal with at least three governments in Finland and Estonia. We expected it to be a faster and smoother project, but ministers come and go so it takes time for the approval”, comments Vesterbacka.

The company has been in discussions with both governments for some time. In April last year, Finland and Estonia signed a Memorandum of Understanding (MoU) for several infrastructure projects, including a tunnel. Kustaa Valtonen, a founding partner of the company: “The government wouldn’t say it is for this specific project, or favour a particular private actor, but the MoU would not have been signed without our project.“

An agreement like this has in fact no legal power, however “it is a statement of will, governments don’t sign MoU’s just for fun”, says Vesterbacka.

No funding from either countries

Unlike many large infrastructure projects, which are often commissioned and funded by countries, this tunnel is a private project. “The Estonian infrastructure minister Taavi Aas has said that he personally thinks only the government should do a project like this. However, there is no public project for the tunnel in Finland nor Estonia, and no budget in either country”, says Vesterbacka. Funding from the EU, like the Fehmarnbelt tunnel – which is being constructed between Germany and Denmark – is getting, is also not in the picture. The EU has stated multiple times that there are other, bigger priorities, according to Vesterbacka.

Before building the tunnel can begin, there are some processes to undergo first, importantly an environmental impact assessment (EIA), which also takes into account socio-economic, cultural and human-health impacts. Part of the approval in Finland is currently completed, and the next step is for the independent authority in Estonia to give the green light to proceed with the EIA, which is causing some delay. The completion of the assessment on the Finnish side is also dependent on this, because they will be synchronised.

When the tunnel is in place, a large shift in the area of the Gulf of Finland is expected. “Tens of thousands of people currently living in Finland could move to Tallinn, and we expect many people in Tallinn to get a job in Helsinki”, explains Vesterbacka.

This effect was also seen after the Øresund bridge, between Copenhagen in Denmark and Malmø in Sweden, was built. “We have benchmarked the Channel Tunnel to the UK, but also more interestingly the Øresund bridge. Very quickly, more than 20.000 people from Denmark moved to the Swedish side because of the slightly lower cost of living. Many people from the Swedish side got a job in Copenhagen.”

Looking at Helsinki and Tallinn, there is a much higher difference in cost of living and salaries. Currently about 50.000 Estonians are living in Finland, 20.000 more than that are working in Finland, and there are about 5.000 Finnish people living on the Estonian side, says Vesterbacka. Hw expects this effect to increase much more when the connection is improved by the tunnel.

The Helsinki-Tallinn tunnel is planned to be finished by the end of 2024, which seems like a short time for such a big project. Vesterbacka: “We have fantastic geological conditions here, that’s why there is already a lot of underground construction in Finland.”

For a fast construction, the plan is to use 16 tunnel boring machines (TBM’s). There will be two tubes, one for rail passenger traffic and one for freight trains. The boring will be done in 8 directions during the whole process, which is how it can be done in about two years. “However, we probably will have to adjust our deadline because of the delay with the governments, if we can’t start in December 2022, it will be impossible”, notes Vesterbacka.

Another reason that it could be faster compared to other European projects is that it would not have to go through public procurement processes, as it is a private project.

No belt and road project

To fund the private project, the company goes into business with UK-based Touchstone Capital Partners, a Chinese investment group. This largest funding partner has committed to fund 15 billion euros, of which 30 percent is equity and 70 percent loans. “The control and majority ownership will remain in Finnish and Estonian hands, which was also a requirement of both governments”, stresses Valtonen.

The majority of the money comes as loans, and these come from everywhere, says Valtonen. “We agreed with the investors, because of the not-always-positive China sentiment, that less than half of these loans are from China. They also include loans from big European and American funds, like pension funds.”

The Chinese investments have raised some questions and critique, to which Vesterbacka responds: “This is not some kind of belt and road project. Yes there is Chinese money, but also European money from all over the place, which you expect from a project of this scale.”

The investment of the tunnel is calculated by the company to pay itself back in seventeen years. Without looking at the operating train company, the model is based on a 50 euro one way and 100 euro retour ticket price, and an unlimited annual pass for 2500 euros, explains Vesterbacka.

“It is very different from the connection between London and Paris. That takes more than 2,5 hours, we think we can easily get to 50 million trips per year through the tunnel when the travel time will be 20 minutes.” For comparison, before the pandemic, in 2018 the number of Channel Tunnel passengers reached around 21.5 million.

Next to the many commuters expected between the two cities, part of the business case will be a growth of Helsinki airport. As a ‘unified’ Helsinki-Tallinn Airport, it would serve as a hub, and travel from outside Europe could increase significantly.

For the realisation of the tunnel, one of the construction partners is CREC, China Railway Engineering Company. “They have a lot of expertise in tunneling, and have built around 18.000 kilometres of railway tunnels”, says Kustaa Valtonen. “For a project of this scale, we need partners that are the best in doing it.“

For the supply of tunnel boring machines, there are three vendors available looking at the technical challenges, says Vesterbacka. “There is Herrenknecht in Germany, and Hitachi in Japan, which is however only focused on the US and Asia. All other TBM manufacturers have been acquired by the Chinese company for a long time. They have built more railway tunnels than the rest of the world combined.”

To drill the tunnel through the sea, TBM’s are not the only drilling machinery that is planned to be used. “Coming from the startup world, we are also using the tunnel project as an innovation platform”, says Vesterbacka.

One of their partners is the company GA Drilling from Bratislava, Slovakia. They have been using a technology called plasma drilling for over 10 years. “The main use case for plasma drilling is to go deep, to generate geothermal energy”, he explains. That is how the station areas are planned to be self-sufficient in energy.

To test it for the project, plasma drilling technology will be attached to existing tunnel boring machines. Based on their estimates, it could double the TBM drilling speed. “This isn’t yet built in our 2 year estimate of construction time, so this might make it even faster”.

To test the tunneling method and prove the conditions are right, the plan is to start drilling a test tunnel in the first half of 2022. “We are now applying for all the permits necessary for eight kilometres of underwater test tunnel to the first island called Rysäkari, off the Finnish coast”. TBM’s have never been used at this scale in Finland ever, so it is important to test and prove that it works.” This tunnel could later be used later as a service and maintenance tunnel.

The total tunnel project will create thirty thousand person years worth of work during construction. Most of the construction workers would come from Belarus, Ukraine and surroundings, says Vesterbacka. “Looking at the construction industry, there is a huge labour shortage in both Finland and Estonia”.

A new undersea tunnel in Europe, which will be the world’s longest undersea tunnel, captures the imagination. However, the tunnel is ‘just a detail’ in the FinEst bay area development”, points Vesterbacka out. “When you invest 15 billion euros in infrastructure, it can have many positive effects, and a big focus for us is attracting people, and talent.” The vision is to attract around 150 thousand university students to the area, for example.

“It is very important for the rest of Europe to connect to this FinEst bay area, because this is where the action is”, says Vesterbacka. He stresses the many start-ups and business opportunities. “This area is leading in the world in venture capital investments per capita, Estonia is number 1, Finland number 2 and Lithuania and Sweden numbers 3 and 4.”

“We have a huge shortage of talent for the future in Finland and Estonia, and actually all of the EU. That is the big picture, and why we want to build the tunnel.”