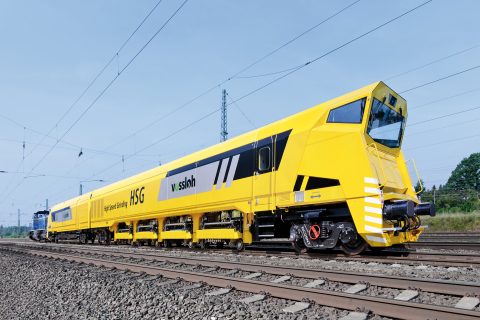 Vossloh was awarded a contract for the supply of three high-speed grinding trains (HSG-city) for use in the metro network of the southern Chinese metropolis of Shenzhen at the beginning of this year. By coupling to the electric traction unit, the newly developed grinding train draws its power from the conductor rail and can therefore be operated emission-free.

In China’s fast-growing mega-metropolises, the expansion of local public transport is progressing at a fast pace. Rail networks are being extended and traffic density is increasing. More than 17 million people currently live in the Shenzhen metropolis and the metro registers up to 7 million passengers daily. The local rail network covers more than 400 kilometres and will be extended to over 1,000 kilometres in the long term.

“China is and remains a particularly important market for us, also in the service business”, says Jan Furnivall, member of Vossloh’s Executive Board. “Including the three HSG-city’s for Shenzhen Metro we have received orders for the delivery of a total of eight HSG-city’s and one VTM compact milling machine from China in the last 12 months.”

High-Speed Grinding (HSG) technology is used for preventive maintenance of the rail network. Vossloh maintenance machines can be used at a speed of 80 kilometres per hour on mainline lines or up to 60 on urban transport lines. This means that maintenance work can be carried out during ongoing operations without the need for timetable adjustments or even line closures. Regular use of the HSG machines effectively prevents rail defects, significantly increases rail service life and reduces rail noise.

“True to our guiding principle ‘enabling green mobility’, the development of an emission-free HSG-city is another consistent step on our green path”, said Oliver Schuster, CEO of Vossloh AG.