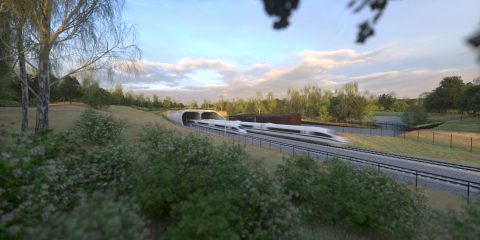 Planned UK high-speed railway line HS2 has revealed what its so-called green tunnels will look like, beginning with the one-and-a-half-mile long Greatworth tunnel. The double-arched structure is one of three tunnels to be built across Buckinghamshire and Northamptonshire in England.

Taking cues from the construction methods used on the French high-speed lines, the tunnels will be created using factory-produced precast segments. The structure consists of five main pieces that, once slotted together, create the double arch. In total, the Greatworth tunnel comprises 5,400 segments that can weight up to 43 tonnes each. According to HS2, utilising this method reduces the carbon emissions of the project during construction. The company lists a fewer need for people and equipment on site as added benefits.

The three tunnels to be built as part of phase one of the HS2 project are labelled green tunnels, in that they can be covered with earth and landscaped. As such, they will blend into the landscape and become less of an eyesore for local communities. The green tunnels will be built near Greatworth, Wendover and Chipping Warden, respectively. Combined, they have a length of nearly nine kilometres (5,5 miles) and consist of 13,290 separate sections.

London to the West Midlands

The first phase of the HS2 project will link London to the West Midlands, the area surrounding the city of Birmingham. It is scheduled for completion some time between 2029 and 2033. Phase 2a will see the line run to the north to Crewe, while work as part of phase 2b is aimed at reaching Manchester. The final leg will consist of a western section and an eastern section. The government considered a connection to Leeds as well, but this is off the table for now.