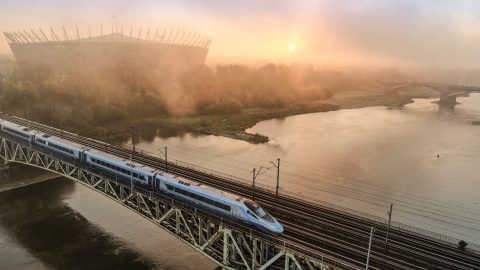 A new cross-city railway line wil run through Poland’s capital Warsaw, but which stations will it connect? That is the subject of a study that infrastructure manager PKP Polskie Linie Kolejowe is commissioning for the new Warsaw railway node. PLK has announced a tender for the selection of a contractor.

Potential corridors of new railway lines in Warsaw will be analysed in the “Planning Study for the Development of the Warsaw Railway Junction with particular emphasis on the new cross-city line”. The contractor will analyse the needs of new stops and the expansion of the lines currently in use.

Where would new stops facilitate agglomeration and regional transport? Answers to these questions, among others, should be provided by a planning study for the Warsaw Railway Node. The study will analyse potential corridors for new railway lines in Warsaw. The contractor will analyse the need for new stops and the extension of lines currently in use.

“The preparation of a Planning Study for the development of the Warsaw Railway Node, with particular attention to the new cross-city line, will make it possible to determine the possibilities of railway development in the Warsaw Railway Node in future years. The document will enable optimal coordination of development of railway and other means of transport in the capital”, said Ireneusz Merchel, President of the Management Board of PKP Polskie Linie Kolejowe S.A.

The study assumes identification of variants of the new cross-city line and other lines, preliminary technical analyses, preparation of a model and forecast analyses, capacity analyses and preparation of conceptual layouts.

“The development of Warsaw’s transport network determines a new look at the possibilities of the Warsaw Railway Node. I hope that the study will make it possible to determine potential corridors of new railway lines in Warsaw and the need for new stops”, said Andrzej Bittel, secretary of state at Poland’s Ministry of Infrastructure.

The development of the planning study is the first stage of strategic planning and preparation for the development of a full feasibility study. The document allows, in a long-term perspective, to define strategic transport investments in the city and the agglomeration.

After awarding the tender, the contractor will have 3.5 years (2022-2025) to prepare the planning study. The study will further develop the “Master Plan for Railway Transport in the Warsaw Agglomeration”. That document is a diagnosis of the current state and contains guidelines for future activities in order to create an offer for Warsaw and within a radius of about 100 kilometres around the capital.