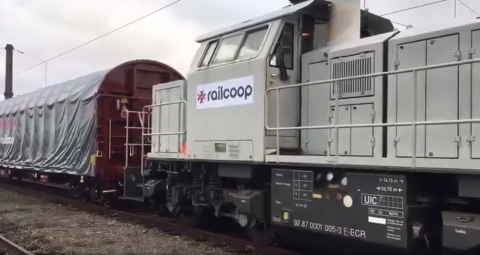 A new operator entered the rail freight market in France, and with a new concept. Railcoop, a rail cooperative currently counting more than 9,000 members, just launched its first rail freight service linking the Aveyron and Lot regions with the Toulouse-St-Jory logistics hub.

The new rail freight service will cover a distance of 180 kilometres, reviving a line that has been closed by SNCF since 2014. Despite being inactive for so many years, the line connects two important economic centres (Decazeville and Toulouse-St-Jory), which, according to Railcoop, are essential for the French supply chain and should reconnect.

The service runs as of Monday 15 November with three weekly roundtrips. Starting from January 2022, it will offer one roundtrip per day. The transported cargo comprises mainly agricultural and industrial products. To launch the first train service, the cooperative leased 24 wagons from Ermewa and two locomotives from DB Cargo, which will be operated by two drivers.

Railcoop is not only entering the rail freight business, but also has plans to launch passenger services. The first service, Bordeaux-Lyon, had to delayed by six months however, because the requested train paths have not been allocated by infrastructure manager SNCF Réseau. The launch date is now expected to be on 11 December 2022, instead of the planned start in June 2022.

Railcoop focuses on reviving regional rail freight links that have been disused but remain essential for the economic growth of smaller decentralised towns and communities. Its service promotes single-wagon trains that do not need to be bundled. Moreover, the cooperative’s goal is to palletise every single wagon.

“We want to create a shuttle that will load small volumes on demand by repackaging as it was forty years ago, without having to order entire wagons”, explained to the french media Dominique Guerrée, volunteer president of Railcoop. As for the customers, Guerrée accepts the fact that they are not easy to attract. However, the cooperative has some agreements in place, and if everything goes by plan, it could launch more services.

What is a rail cooperative?

Railcoop acquired the licence allowing it to begin operations last September. However, the cooperative society has a longer story. It was created in November 2019 by 32 members who were the project’s pioneers. It is the first rail cooperative launched in France with the ambition to promote rail mobility by involving “citizens, communities, businesses and railway workers, to develop railway transport adapted to the needs of all regions,” says the initiative’s founding manifesto.

In two years, the idea has attracted 9,140 members, including around 100 companies and associations and 12 communities such as the agglomeration communities of Libourne, Vichy and Montluçon. The case of Railcoop indicates that the cultural shift of society towards a green and sustainable mobility is in full steam. So many different parties strive to make people take a new look at rail and develop the market using more diverse economic and business models. Could that also be a glance into the future?