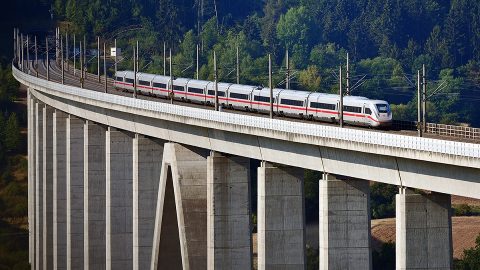 Siemens chief executive Roland Busch has criticised the plans of the political parties FDP and the Greens to split up the state-owned Deutsche Bahn. He fears that a reform of the railways will take years due to political conflicts and will paralyse the railways.

The head of the Siemens Group indicated at their annual press conference in Munich that it makes more sense to focus on other things and to speed up investment projects, reports the newspaper Der Spiegel. He argues for an expansion of infrastructure and digitalisation of the railways, “so can get 20 per cent more capacity out of the railways”.

The FDP and Green party are currently in talks to form a coalition for the new government, following last September’s elections in Germany.

The two parties have proposed two models for the reorganisation of the railways in the coalition negotiations. One model provides for a legal, personnel and budgetary separation of network and train operation under the umbrella of a holding company. In the second scenario, the infrastructure is placed in an organisation that is focused on the public interest and long-distance, regional and freight traffic is privatised. The parties want to promote competition and rail transport in order to reduce CO2 emissions.

Busch does not understand why you have to “break up something that is working now”. Long-distance transport, in which the railways have a near-monopoly, only accounts for some five billion euros in turnover, while competition already exists in regional transport, Busch argued.

The German Monopolies Commission recently called on the parties at the formation table to separate the management of the railway network from its operation. According to the committee, this is necessary to make rail transport more competitive. A fierce battle has already developed around the unbundling plans, with the railway union EVG calling for demonstrations. The SPD party is also against a real break-up.

Siemens supplies high-speed trains like the ICE, signalling technology and electrification for Deutsche Bahn, but also serves competitors of the state-owned company.