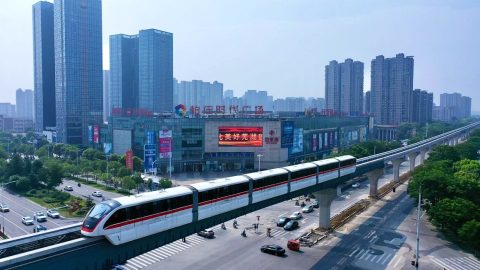 A fully automated, driverless monorail opened in Wuhu in Eastern China, a first in the country. It is equipped with Automatic Train Operation (ATO) GoA 4, and is developed by a joint venture of Alstom and CRRC.

A fleet of 28 six-car Innovia monorail trains entered commercial service this week on Rail Transit’s Line 1 in Wuhu, a city around 450 kilometres west of Shanghai. A second line is expected to open by the end of 2021. Construction of this monorail started in 2017, with a total project investment of more than 8 billion yuan (just over 1 billion euros), according to local authorities.

Monorail is not the most widely used transportation system, metro’s or trams being the more obvious choice. Monorails have to be elevated, even at ground levels and it is more difficult to switch tracks. With a monorail, the train itself wraps around the monorail track, making it more complicated to change tracks, though not impossible.

The 25-station line in Wuhu is 30.46 kilometre long and its tentative operating hours from 06:30-22:00 on weekdays and holidays. During the last month, trials runs were carried out with the automated monorail train. Over 40,000 people experienced the tests.

The train’s passenger compartment offers a clear and open view as the entire train passes through the city. With strong dynamic performance, exceptional climbing ability and a tight turning radius, the train is well adapted to the needs of an urban landscape. “Wuhu’s new fully automated and driverless elevated monorail will be a game changer for residents, decreasing their commute time while also reducing congestion, pollution, and carbon emissions in the city”, said Jianwei Zhang, President of Alstom China.

Wuhu Line 1’s new elevated monorail operates at a speed of 80 kilometres per hour and has been equipped with ATO GoA4, the most-advanced and highest level of automatic train operation that enables the train to operate both driverless and fully unattended. To ensure the safe, reliable and efficient operation, the train has also been deeply integrated with key technologies such as track beams, switches and power supply rails.