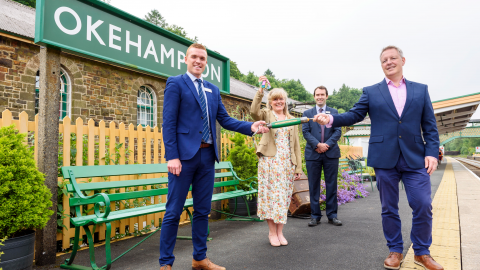 For the first time in nearly 50 years, regular passenger services will run on the Dartmoor Line, connecting Okehampton to Exeter. The line will officially reopen for year-round services on 20 November, ahead of schedule. It is the first former line to reopen under the government plan to restore old lines back into service.

Regular passenger services will run on the Dartmoor line for the first time following years of campaigning by local supporters. Originally opened in October 1871, the last regular train service on the route operated in 1972, when passenger services were withdrawn by British Rail. Since 1997, the line has only been open during the summer. The line is named after Dartmoor National Park, and connects the local hub Exeter and the historic town of Okehampton.

After 1972, the line also remained in use to serve Meldon Quarry, situated west of Okehampton, a supplier of railway ballast and related materials. The line between Coleford Junction and Meldon Quarry was sold at the time of privatisation in the 1990s to the quarry owner, now known as Aggregate Industries. It was reacquired by Network Rail earlier this year.

The reopening is the first one under the Government’s Restoring Your Railway programme, which is exploring ways to return old lines and stations to service across the country.

The Transport Department and its partners have accelerated the reopening of the railway, delivering passenger services in only 9 months from the original funding being approved to entry into service. As the Government continues its overhaul of the railways following the Williams-Shapps Plan for Rail, more lines and stations will be reopened.

Trains will run every 2 hours, increasing to hourly from May 2022. The route connects Exeter St Davids, Crediton and Okehampton, providing a launchpad for visitors to explore Dartmoor Park and regional links for local commuters. Around half of services, including at peak times, will also run to Exeter Central. Tickets are on sale from 12 October.

To reopen the line in just 9 months, a team of engineers have worked tirelessly, including laying 11 miles of new track and installing 24,000 concrete sleepers and 29,000 tonnes of ballast in record time, says Network Rail. Repairs have also been made to 21 structures along the route including four bridges and a range of works such as vegetation clearance, earth and drainage works and fencing, which are ongoing in preparation for the return of trains.

More work will be carried out over the winter including further work on the station buildings to enable the restoration of the café and other facilities.

“The project, funded by over 40 million pounds from the Department for Transport, is part of the wider campaign to reverse catastrophic cuts to the rail network”, says UK Transport Secretary Grant Shapps.

Richard Burningham, Manager of the Devon & Cornwall Rail Partnership: ”November 20 will be the day Okehampton fully re-joins the national rail network. All of a sudden, a large area of west Devon and north and east Cornwall will be 30 miles nearer the railway than it is today. This is going to make a big, very positive difference to many people’s lives.”

The Scottish Government has been reopening and extending lines for around 20 years, so it is good to see the London government following their lead.