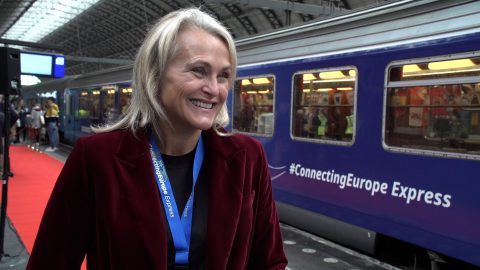 At the arrival of the Connecting Europe Express in Amsterdam, CEO of Dutch national railways NS Marjan Rintel draws attention to the slow connection with Germany. “From Amsterdam you can go to Paris and back, but in that time you travel one way to Berlin. It’s important to adapt our infrastructure to that.”

The Connecting Europes Express arrived in Amsterdam on Sunday after travelling across Europe, before leaving to Belgium, Luxembourgh and end station Paris. “The Connecting Europe Express in an excellent example of the good and the bad of European train travel today. It shows what Europe can achieve, but also that pushing boundaries is challenging”, says Marjan Rintel, CEO of NS.

Ans Rietstra, Operational Director of Dutch infrastructure manager ProRail: “It’s so special that this train travels through 26 countries to really connect with each other to emphasise that train travel is extremely important for achieving the climate targets. We also want to make it easier and simpler for passengers to travel from a to b.”

“For the Connecting Europe Express, you already need three different trains, because infrastructure on the way is so different”, says Rintel, referring to the three different gauge widths that exist in Europe.” According to the NS top woman, in order to improve international rail connections, investments must be made in the rail infrastructure. “Faced with climate change, international rail transport is needed, which is even being 200 years old still the most modern and sustainable way of transport.”

For the NS CEO, the slow connection to Germany is an issue that needs large improvements. “We want to get to Berlin much faster, but also to the whole Rhine-Ruhr area. That way, you can not only get to Germany faster, but also to Italy, Austria and other countries around it. This requires a number of things, such as a good rail infrastructure. We must ensure that we can quickly connect to the high-speed lines in Germany.”

By improving the connecting, no fewer than 18 million Europeans will benefit, says Rintel. “It’s projects like this we need if we truly want to fight climate change. That is the story of the Connecting Europe Express, the question is: will we hop on or hop off?”

Three different gauge widths that exist in Europe? Is that a main problem? Does she know what she is talking about?
Spain has its highspeed network built in standard European gauge. And it has trains that can change gauge to the Iberian classic lines gauge. Talgo-nighttrains used to run from Spain to Paris, Switzerland and Italy. So there are no real gauge problems to connect th Iberian peninsula.
Rail Baltica will bring the European standard gauge to the Baltic EU-states within 5-10 years.

Mrs Rintel should thank transport minister Tineke Netelenbos who skipped the plans for construction of the high speed line from Amsterdam to Arnhem and the German border (HSL Oost) in 2001. It was a combination of upgrading the railway and the parallel motorway A12, supported by all communities and authorithies, which is rather unique. It could have been ready 15 years ago. But Netelenbos decided the country did not need another high speed railwayline, so only the A12 was upgraded.