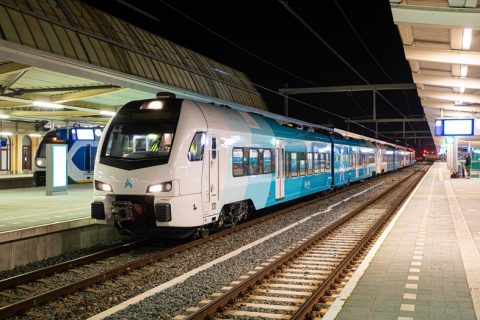 Arriva is allowed to offer three new open-access train services in the Netherlands from 2023, a breakthrough in the country. The trains will run partly at night, once a week between Groningen and Schiphol and between Maastricht and Schiphol, and five times a day between Apeldoorn and Amersfoort.

The train services do not fall under a rail concession awarded by the government, as is the case for Dutch Railway NS’ operations on the main Dutch main rail network. Based on European legislation, open-access services are now also possible on the main rail network in the Netherlands since January 2021. Before, Arriva only operated on regional lines.

That is, provided they do not have a significant negative impact on an existing concession. The Dutch Market Authority has now concluded that this is not the case. The maximum negative impact on the profit margin of the main rail network concession, operated by NS, is only 0.03 percent.

Anne Hettinga, Managing Director of Arriva Netherlands said earlier that the company is happy with Europe, as the Dutch cabinet in contrary has done everything it can to push back liberalisation of the railways. “We have been gnawing at the monopoly position of NS since forever. This step shows how we view the future of rail.”

The approval marks the first domestic open-access service in the Netherlands. It is also Arriva’s first market outside of the UK to run domestic open-access operations. This operating model means the train operator carries all the associated costs and risks with the services, without any government concession.

Since January 2021, railway undertakings have been able to offer open-access services in the Netherlands. They must first report these to the Market and Consumers Authority (ACM), after which holders of existing railway concessions and the granters of those concessions are given the opportunity to ask the ACM to investigate whether there is a significant negative impact on the concession. This investigation was carried out at the request of the Dutch Ministry of Infrastructure, the granter of the main rail network concession.

“This is a commercially smart way to bring benefits to passengers, connect the rural provinces with the urbanised western part of the country and allow our business to grow by making better use of our existing fleet of trains”, said Hettinga about the proposal. “Furthermore, these services have the potential to grow the market and the usage of public transport by encouraging people out of their cars.”