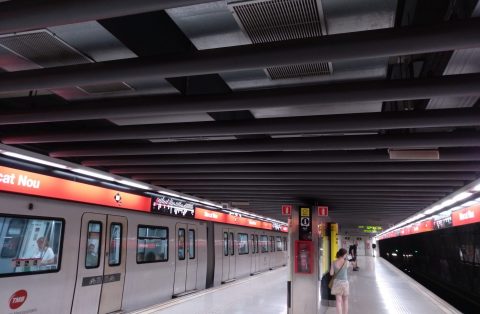 “The system takes data from the infrastructure, such as temperature, humidity and air quality. With machine learning algorithms it predicts how the variables evolve in different scenarios”, explains Enrique Gómez Cristóbal, Director of the Consultancy services & New technologies Department for infrastructure and transport at the company. “The system then selects the most optimal operation strategy for the next three days, which is adjusted every hour.”

SENER’s origins are in Bilbao, the same city where the Intelligent Rail Summit on 21-23 September takes place, where they will share their insights. In Bilbao, they were involved in the design and construction of the metro network 30 years ago. Now, their system for ventilation optimisation, called RESPIRA, has been developed for the metro in Barcelona.

The system is active in all of the stations of Lines 1 to 5 of metro Barcelona, which are connected by the metro tunnel. The original concern when they started three years ago was related to thermal comfort in the stations. In summer it is very hot in Barcelona, with high humidity. With numerical models SENER made a strategy, with which they managed to decrease the average temperature with 1 degree. “But then we thought: we can do even more with real-time data combined with Artificial Intelligence.” Now, the average temperature is lowered by another 1,3 degree within one year.

The other large benefit is air quality, in the metro network the problem is related especially to particulate matters. This can also be measured in real-time, and taken into account in the ventilation strategy.

“In terms of energy consumption, the AI system also has advantages”, says Enrique. The system has already reduced energy consumption by almost 12 percent. “With Covid, the ventilation systems have been forced to work more than usual as well, so this is now even more important.” The company estimates that in normal conditions, the energy savings could be 20 to 25 percent.

Using scientific models from the University of Colorado, an estimation of the risk of Covid transmission is also made using RESPIRA. This has a theoretical basis, but with the best models currently available, says Enrique. This calculates the risk of contagion in a space, and is fed with real-time data. The risk is actualised and how it evolves in stations, and this is taken into account in operating the ventilation system.

Ventilation in large buildings and stations

The Barcelona metro only uses fans which move the air, which is already a complex system as there are a lot of interconnected spaces. Now, SENER has also included climatisation systems, with air and water circuits to cool the air down, in their tool. The algorithms can now also work with these systems, and is implemented in their own offices in Madrid. This consists of seven interconnected buildings, making a quite complex ventilation and climatisation system.

This system could also be used for large railway stations, for example. SENER is starting several projects for buildings, such as an airport. The company is also analysing the possibilities of implementing the system inside of trains. For this they are talking to operators and manufacturers of vehicles.

The first system that SENER developed making massive use of data, but not yet AI, was for a system for Tunnel Boring Machines, called ACROT. This analyses the risks in operations of these machines, which dig tunnels for metro’s. It was developed following an accident in Portugal where a construction worker died.

“Data from the machine and the surface is used to analyse what is happening and give advice when to go slower or when intervention is needed. The system was refined and went through a strong test in the excavation of the High-Speed line in Barcelona”, says Enrique. “This took place very close to the Sagrada Familia basilica, so it was critical that the tunnel boring had no effects on it.”

At the Intelligent Rail Summit on 21-23 September in Bilbao, Enrique Gómez Cristóbal will further dive into the AI system. Registration for physical and digital tickets is still open.