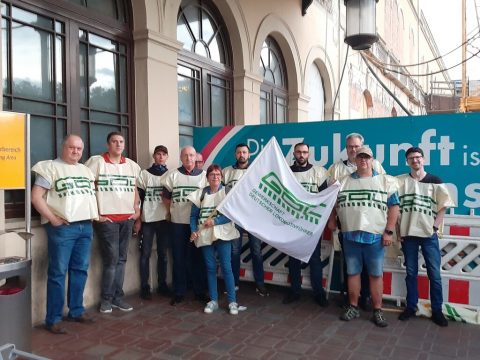 Deutsche Bahn took legal action against the strike of the German Locomotive Drivers Union (GDL), but without succes. The current strike is the third and longest one in a month, and is planned by GDL to last until 7 September 2am.

The German state railways filed an application for an injunction against the GDL strikes at the labor court in Frankfurt am Main. An injunction is a court order requiring a person to do or cease doing a specific action. Deutsche Bahn says that the labor dispute is more about legal and political issues than about finding solutions for good working conditions at the negotiating table.

“We were aware that the hurdles in summary proceedings are very high and that the right to strike is rightly very well protected in Germany”, said a Deutsche Bahn spokeswoman. “Whatever the outcome will be. We have to try.” According to Deutsche Bahn, the strike is disproportionate. The company calls on train drivers’ union GDL to stop the actions.

DB  had presented the GDL with a new offer, which the GDL rejected immediately without further negotiations. In the offer, DB specified its commitment to pay a corona premium. As in the public sector, this premium for the year 2021 should be 600 or 400 euros, depending on the salary group. This is mostly in line with GDL’s demand of a one-time bonus of 600 euros for the staff.

The conflict mainly revolves around a wage increase in two steps totalling 3.2 percent. That is what GDL demands and Deutsche Bahn has also offered. The disagreement is about when the wage increases would take effect. The GDL demands that employees receive an initial increase of 1.4 percent in the current year. The Deutsche Bahn’s proposal so far provided for a first stage of 1.5 percent in spring 2022.

In addition, GDL wants a shorter runtime, as a current high inflation rate is likely to mean that the increase will in reality be lower later on. DB now compromised in terms of runtime. Instead of the previous 40 months, the new collective agreement will run for 36 months. Seiler said earlier about this that they need a slightly longer term in order to be able to cope with the huge corona damage.

With the larger railway and transport union (EVG), DB has already agreed a wage increase of 1.5 percent for a period from the beginning of 2022 to the end of February 2023, with no wage increase this year.