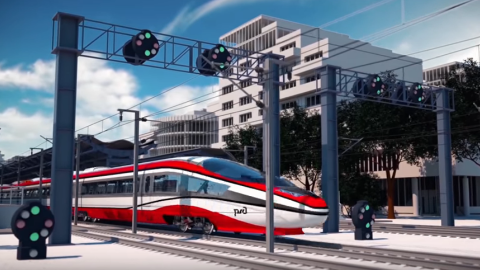 New Russian high-speed train will be ready in 2028

A new high-speed train with a speed of up to 400 kilometres per hour, which is being developed by Russian Railways and Sinara, should be manufactured and certified by 2028.

The trains will be produced in the Ural Locomotives plant, a joint venture of the Sinara group and Siemens. The signed an agreement with Russian Railways in 2020 for the production of trains for high-speed railways in Russia.

The news that the new train will be completed by 2028 was announced by Dmitry Pumpyansky, President of Sinara Group during a press conference of state news agency TASS dedicated to the goals, objectives and interim results of the Year of Science and Technology in Russia.

“The development of a train with a maximum speed of 400 km/h is a challenge not only for the organisation of traffic, but it is a challenge for the whole world and Russian science in general. We will be one of the three countries that can produce such trains. And the task today is to make, test and certify and make this train ready by 2028”, said Dmitry Pumpyansky.

This task will require the implementation of a wide range of supporting scientific projects in the fields of materials science, aerodynamics, 3D scanning, 3D printing and the development of digital twins, Pumpyansky added. “Suffice to say that the aerodynamic chamber for testing a high-speed train is actually more complicated than the test chamber for a jet plane”, stressed the president of the Sinara group.

Earlier Pumpyansky reported that the engineering center of Russian Railways and the Sinara group, which is located in the scientific and technical center (STC) of TMK in Skolkovo, is developing a new Russian train for high-speed lines with a cruising speed of 360 kilometres per hour and a maximum speed of up to 400.

It is not yet announced where the 400 km/h train will run on the Russian network. However, an additional high-speed line between Moscow and St Petersburg is being built, where trains will be able to run at speeds of up to 400 km/h. The railway between the two cities currently consists of four tracks, but this will be expanded to six. This is expected to be completed by 2027. Russian Railways currently runs high-speed trains between the Moscow and St Petersburg at a top speed of 250 kilometres per hour. Sapsan trains (Russian for Peregrine Falcon) are used, designed and built by Siemens, based on its Velaro platform.

There have long been plans for a new high-speed line between Moscow and Kazan, Russia’s fifth-largest city and capital of Tatarstan. The call to build this 770-kilometre-long rail line was first announced by President Vladimir Putin at the Economic Forum at St. Petersburg in 2013. Plans for the railroad estimate that it will be the first (dedicated) high-speed line in Russia with trains operating at up to 400 kilometres per hour. A rail trip from Moscow to Kazan which today takes a close to 13 hours trip, would be reduced to 3.5 hours. In 2020, Chinese state company CRRC signed to build part of the line, which would be finished by 2024.

It is unclear if the Russian train will also run there, as CRRC launched a prototype of a 400 km/h gauge changing train for international travel last year. It was said that the train would make its international debut on the Moscow-Kazan high-speed line in Russia.

It is a significant increase of speed from the current trains with a top speed of 250km/hour to trains operating at a top speed of 400km/hour, especially bearing in mind the extremes of temperature and weather conditions including snow and ice, so a lot of testing and simulation will probably be required before train operations can start. Quite a challenge.