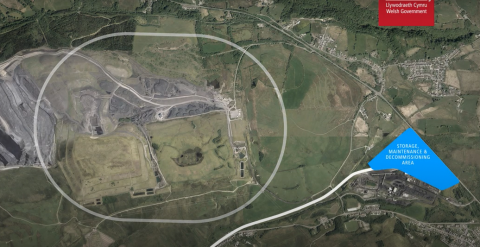 An opencast mine in Wales will be the construction ground for a brand new railway testing center. At the Global Centre of Rail Excellence, rolling stock, infrastructure and new technology will be tested in the future.

Wales wants to deliver a world class train testing facility in the United Kingdom. This will provide a vital service to UK and international train manufacturers, network operators, the wider industry and the supply chain.

The Global Centre of Rail Excellence (GCRE) already got approval from the local Neath Port Talbot Council last month, but it has now formally received the go-ahead after Powys County Council approved the application for the site from Welsh government. Site preparation and construction will start this year, and takes until 2023. It will be partly operational by then, and fully operational by 2025.

A joint venture was established in 2019 between Welsh Government and both Powys and Neath Port Talbot councils to support project development and delivery. A land option deal has been completed for the sites at the Nant Helen surface mine and Onllwyn coal washery, which will see Celtic Energy gift all the land necessary for the project.

The Welsh Government is investing £50 million to support the delivery of the new facility. The UK Government has also pledged to invest £30 million in the project.