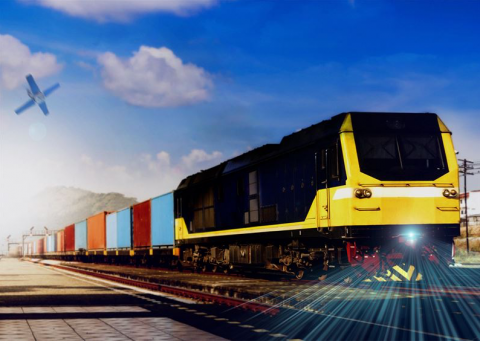 Autonomous freight train to be tested in Finland

The freight train will have Automatic Train Operation over the European system ETCS at GoA4, the highest grade of automation. The project is proceeding at its test phase. In particular, test operations will start by the end of 2021, while the autonomous train will be ready to operate on tracks by 2023. Apart from Proxion, the project includes other companies like VTT, Teräspyörä Oy and Electric Power Finland Oy.

VTT produces the sensor technology and software needed to observe the environment for the project. Teräspyörä Oy is responsible for fleet development and Electric Power Finland Oy for the digitisation of rail equipment. Business Finland is the funding partner.

The project’s first steps will take place in Finland, where the partnered companies will attempt to improve the operating conditions of the metal and wood industries. The companies participating in the pilot are steel company Outokumpu in Tornio and forest industry company Stora Enso in Imatra.

Objectives include lower transport emissions and cost-effective solutions for the local industries that rely mainly on road transport. The small train unit that is being developed will provide agility and longevity for infrastructure and a solution to driver unavailability.

Simultaneously, safety is the first and foremost priority. An autonomous freight train travelling on tracks sounds like a story from the future. Nevertheless, such concepts have not been used in the past, and they raise safety concerns, especially since they involve transporting heavy cargo that needs special monitoring.

That is why VTT, the company that undertakes the technological and software part of the new concept, focuses on its reliability. “It is important to ensure that the autonomous train operates reliably in all conditions and a wide range of track environments. It is a leap towards safer rail transport. For example, the unit is developing sensor interpretation technology and combining a thermal camera and radar observations to be able to react correctly and in time to any obstacles or situations ahead,” explained Pertti Peussa, Leading Researcher at VTT.

Autonomy and mobility are becoming two intertwined terms. There is a global trend in all fields of transport exploring the possibilities of autonomous vehicles. However, railways seem to come last in this race. That’s the main motive behind the new project’s development. Moreover, as Reijo Viinonen, project manager of the Autonomous Train project, underlined, “the strict climate targets set by the EU are precisely in favour of the development of electric modes of transport. Therefore, the innovative development of rail transport is key to make mobility ever lower-emission and achieve better rail utilisation”.

On the same wavelength, Janne Hauta, Finnish Ministry of Transport and Communications Ministerial Advisor, specialised in rail automation, highlighted that “the development of railway automation and ecosystems is currently a national interest for several European countries. All transportation will require AI-based data utilisation solutions that are also at the heart of the autonomous train project. The whole project represents a bold, innovative pilot that creates cost-effective, dynamic new services that support business needs”.