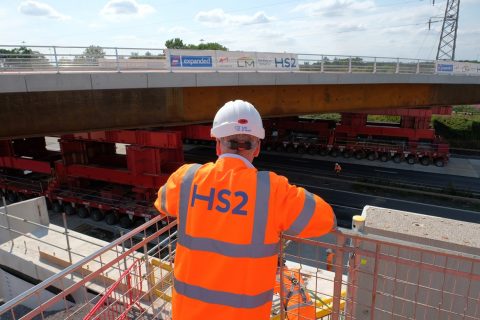 There are fears that Britain’s high-speed railway project HS2 may never be extended beyond the London – Birmingham link, currently under construction. The extension of the project to reach Leeds may be shelved according to a ministerial planning review. According to British press reports, the project is to concentrate on the extension to Manchester only.

While work continues on the construction of HS2 between London and Birmingham, the UK government has halted planning work for the proposed ‘eastern leg’. The extension would take the high-speed line to Leeds as part of the economic regeneration of the North of England. Civic leaders have expressed dismay over the news.

The eastern leg of HS2 – officially known as Phase 2b, is part of strategic rail programme Northern Powerhouse Rail. Part of this is to extend the high-speed line also between Liverpool and Leeds, nicknamed HS3. However, it may not even come to Manchester.

There is concern that the first casualty of a government budget cut could be the extension of the high-speed rail project to the north. Ministers have halted planning for the extension of the HS2 project to the northeast of England. That would preclude bringing high-speed services to the East Midlands (principally Derby and Nottingham), the cities of Sheffield and Leeds, and connecting directly to the East Coast Main Line.

News of the halt to planning has brought a dismayed reaction from civic representatives. The local authority leader in Leeds, James Lewis, representing the left-wing Labour party, has written to the prime minister urging a rethink. The right-wing member of parliament for Mansfield and leader of Nottinghamshire Council, the Conservative politician Ben Bradley, is a co-signatory to the letter.

Lewis and Bradley’s letter urges prime minister Boris Johnson to give what they call ‘HS2 east’ the green light to move to the delivery and implementation stage. The letter says that the government must publish its very overdue Integrated Rail Plan. The document was originally due to be published last year. They say the plan recognises that HS2 is the best opportunity to create a substantial increase in capacity for rail freight.

The UK government Department has called the planning halt for Transport. It’s widely believed that the measures respond to the cost of economic support implemented during the pandemic. Those costs are put at around 300 billion pounds (330 billion euros), around three times the total perceived budget of the HS2 project.

The main concern expressed is the damage to freight capacity. According to the letter, HS2 will improve passengers’ connectivity and create capacity for up to 144 extra freight trains every day. “Currently, the rail freight sector carries over 30 billion pounds (33 billion euros) of goods per year, with the industry contributing 870 million pounds (965 million euros) per annum to the UK economy. Yet there are around half as many freight trains using the network than there were 15 years ago, with the conventional network at capacity and critical pinch points from the East Midlands to Newcastle” the letter states.

Both Lewis and Bradley note that there is already significant growth in the rail freight sector and that cancelling the extension would stifle that demand. “There is a growing demand for rail freight around Sheffield, with a new rail freight terminal opening at Tinsley, use of iPort in Doncaster by rail, and growth in aggregates traffic through Hope Valley from the Buxton quarries. Further north, the East Coast Main Line capacity is constrained due to the lack of upgrades to reroute freight.”