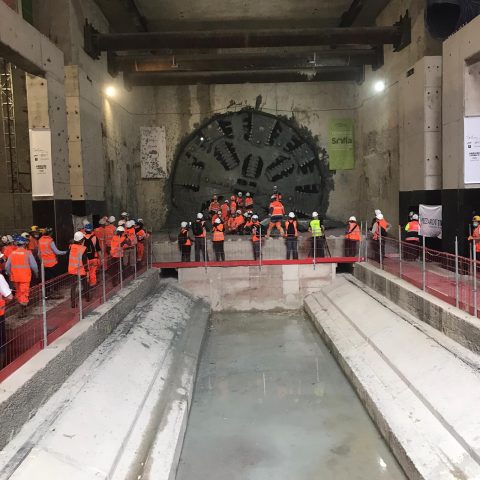 The Sofia tunnel boring machine has finished its run in Paris last week after 15 months of digging. Six new stations will see the light of day, and an extension of 6 kilometres of track. The extension and additional modernisation works are scheduled to be finished in 2023.

The Sofia tunnel boring machine finishes its run after three kilometres of digging. With a speed of about 14 metres per day, the tunnel boring machine of metro line 11 was named Sofia in tribute to Sofia Amalou, an agent of the metro’s operator RATP who welcomes passengers on line 11 on a daily basis. It connects the four future stations Serge Gainsbourg, Place Carnot, Montreuil-Hôpital and La Dhuys.

In order to connect the current line and the extended line, a 250-metre tunnel had been previously dug using a traditional method from the Mairie des Lilas station to the future Serge Gainsbourg station. In addition, the viaduct of the future Coteaux Beauclair station and the rectangular Rosny-Bois Perrier tunnel are also connected.

The future Serge Gainsbourg station, the second station of line 11 in the town of Lilas, expects to accommodate 15,000 travelers per day. It fits into the heart of a large residential area, offering more Lilasians access to the metro.

Two new entrances were created and numerous modernisation works were carried out on the existing stations of line 11, made necessary by the evolution of the operating system, the passage from 4 to 5 cars and the expected increase in the number of travelers.

New entrances exits at Goncourt will be built in Summer 2021. In fall this year, a new corridor at Chatelet and Jordan will be constructed to o streamline passenger flows and simplify connections. Also, a new emergency exit at Place des Fêtes will be constructed in Fall 2021. The viaduct, 600 metres long and emblem of the extension of line 11, as well as the glass roof of the Côteaux-Beauclair air station have also been installed.

he first Alstom MP14 5-car train is currently being tested on line 1, at night and without passengers. It will then be dismantled and transported to the new train maintenance workshop in Rosny-sous-Bois for a second phase of testing and running in on the last kilometre of the extension of line 11.

An investment of nearly 1.3 billion euros

RATP, operator of line 11, designs and carries out the works, and Île-de-France Mobilités, the organising authority for transport in Île-de-France, wensures compliance with the programme, schedule and costs throughout the project. Worth a total of nearly 1.3 billion euros (economic conditions of 2014), the project is funded by the French State, the Île-de-France Region, the Société du Grand Paris, the Seine Departmental Council -Saint-Denis, RATP and the City of Paris.