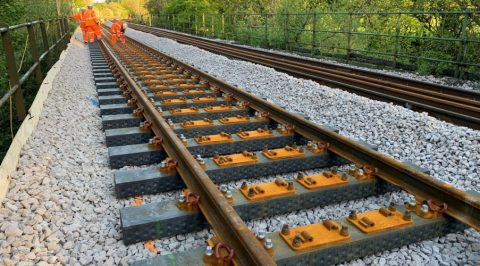 Trains in Wiltshire are now running on top of old bottles, food packaging and other unwanted plastics, with the introduction of the first composite railway sleepers on Network Rail’s main line tracks.

Made from recycled plastic, engineers recently installed the environmentally-friendly technology across the weight-restricted Sherrington Viaduct, between Salisbury and Warminster. Previously, wooden sleepers had to be laid on the track across the viaduct, because concrete is too heavy for the structure. Sleepers sit on top of the ballast and hold up the rails, keeping them the correct distance apart.

From 31 July this year, creosote-treated softwood sleepers will be banned. Creosote extends the life of wood, but it is hazardous to the environment. The alternative is sleepers made from hardwood. Instead, Network Rail chose new sleepers that are manufactured by Sicut Ltd in the UK, using a mix of locally-sourced plastic waste that otherwise end up at landfill.

“This is an exciting development; use of these recycled sleepers on the Network Rail Wessex route is a first for the overground railway network in Britain”, says Mark Killick, Network Rail’s Wessex route director. “By using these sleepers, not only are we upgrading the track for customers, they will be travelling on a railway laid using sustainable materials as part of the circular economy.”

UK Rail Minister Chris Heaton-Harris said: “I am proud to see such a positive innovation being used for the first time on the mainline railway. Not only are these sleepers made from locally-sourced plastic waste, they need less maintenance and will last longer, underlining our commitment to create a greener, cleaner and more efficient rail network.”

The recycled composite sleepers will help Network Rail achieve its Zero Carbon 2050 target. According to the infrastructure manager, they have at least a 40 per cent reduction in greenhouse gas emissions from sleeper production.

The sleepers also offer an increase in service life and reduced maintenance compared with timber sleepers. Unlike traditional wooden sleepers, composite sleepers do not split, rot or degrade over time and can resist water, oil, chemicals and fungi. They are designed to endure for at least 50 years. When they are eventually replaced, they can be re-used, re-purposed or recycled to make new sleepers or other composite products.