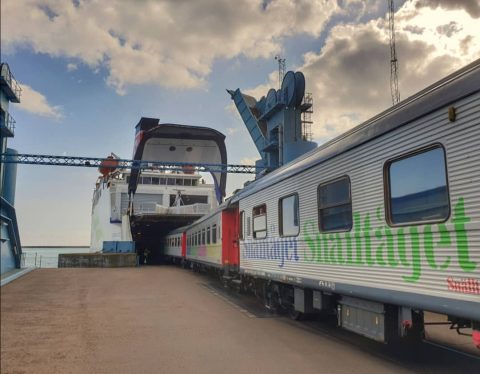 Rail ferry is history for the night train Stockholm – Berlin

It was long awaited: Snälltåget’s night train from Sweden to Berlin resumed service on Sunday, but with a very different route than before. Instead of using a ferry between Sweden and Germany, it now runs via Copenhagen via the Great Belt Fixed Link in Denmark.

The new route of the night train is now Stockholm-Malmö-Copenhagen-Hamburg-Berlin. It replaces the former Malmö-Berlin route, which Snälltåget operated between 2012 and 2019 using the ferry between Trelleborg, Sweden, and Sassnitz, Germany.

Delayed decisions, uncertainty about the future of the train ferry route Trelleborg – Sassnitz, quarantine rules in Germany and as a result many cancellations, Snälltåget was forced to cancel the Berlin train for the rest of the summer of 2020. As finally the ferry ceased operations, there was only one alternative for Snälltåget to reach Berlin: by taking a long diversion via Copenhagen in Denmark, run via the Great Belt Fixed Link and then on to northern Germany via Hamburg.

Before Snälltåget, there was a Euronight train in the early 1990s between Hamburg, Stockholm and Oslo, which was later cancelled. The train travelled on two ferry services, one between Germany and Denmark, the other between Denmark and Sweden. Now, the use of ferries on the route is altogether in the past.

More departures than ever

The train departs daily during the summer months of June, July and August and as a weekend train April, May and September. In total, the traffic will almost quadruple the number of departures compared to the traffic in 2019. In addition to Stockholm receiving direct trains to Berlin and Hamburg, Copenhagen will also receive direct night trains to Hamburg and Berlin.

The journey is long and the timetable has been designed to favour all of Sweden as well as Copenhagen in the north and Hamburg and Berlin in the south. The new train departs from Stockholm and then stops in Södertälje, Norrköping, Linköping, Nässjö, Alvesta, Hässleholm, Eslöv, Lund and Malmö in Sweden.

The night train stops only at Copenhagen Høje Taastrup (a suburban station avoiding the turnaround at the main station), where the train has a departure at 10.32 pm. It is the only stop in Denmark, before a very early arrival the day after in the morning at Hamburg-Hbf at 5.32 am, Berlin being reached at 8.52 am. On Sundays, the timetable is even longer due to works on the Rendsburger Hochbrücke in northern Germany.

Further in the future: a tunnel

Currently, the train route from Germany to Copenhagen runs North along the Danish region Jutland, to then run to Funen and cross the water to the island Zealand via the Great Belt Bridge. However, in the future, there will be a direct tunnel between Germany and Denmark: the Fehmarnbelt tunnel. This will make the route significantly shorter.

When the Fehmarnbelt tunnel and the upgrading of the rail infrastructure on both sides of the link are completed, the journey time will be cut by two hours. Construction of the tunnel already started in January this year, but it will take some time before it will be ready. It is currently planned to be finished in 2029. It is to be expected that the night train Stockholm – Copenhagen – Berlin will then take the shortest route: over the seabed.