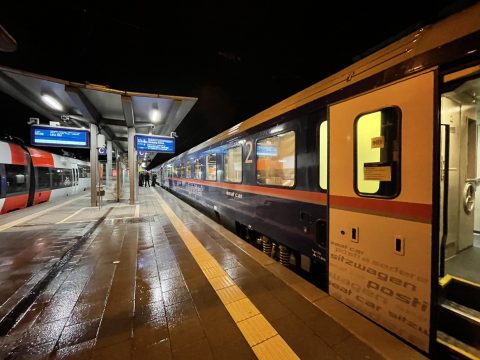 The first Nightjet train from Vienna to Amsterdam  and Brussels arrived on Tuesday morning. Operator ÖBB planned to start the new connection in December, but this was delayed due to the pandemic. With the night train, the travel time between Amsterdam and Vienna will be about 14 hours. In both directions, the train arrives before 10:00 in the morning.

With the Nightjet from Vienna, the Netherlands has now been reconnected to the European network of night trains for the first time since 2016.  The first Nightjet to Vienna arrived at Amsterdam Central Station on Tuesday 25 May at 10.43 am. On board were Austrian Minister of Climate and Mobility Leonore Gewessler and ÖBB’s General Manager Andreas Matthä. State Secretary for Infrastructure and Water Management Stientje van Veldhoven and NS CEO Marjan Rintel welcomed the Nightjet in Amsterdam.

No subsidy in the future

For the new Nightjet, which runs daily from Amsterdam to the Austrian capital and Innsbruck, the Dutch government made a subsidy of 6.7 million euros available. However, this should be seen as a pilot according to Van Veldhoven Nnew night trains between the Netherlands and other countries must be possible without subsidy.

“I think this is possible,” said van Veldhoven at the first arrival of the new sleeper train from Vienna. The minister assumes that there is a demand for more international train connections that do not necessarily have to be operated by NS. She would rather not allocate a subsidy for the next night train.

“After Berlin, Brussels, London and Paris, we are once again adding a direct connection to a European capital to our timetable with this night train to Vienna and Innsbruck. In addition, the night train is a climate-friendly way to travel internationally”, says NS CEO Marjan Rintel.

ÖBB CEO Andreas Matthä: “With the arrival of the Nightjet, we mark the next milestone for a sustainable European network of night trains. Travelers can travel safely, relaxed and climate-friendly with the Nightjet. A single train journey from Vienna to Amsterdam saves almost 100,000 kilograms of CO2 emissions compared to a flight.”

The international connection was planned to start last December, but was postponed due to the corona pandemic. Corona restrictions still apply today: travelers to Germany must register online and show a negative PCR test. In addition, an orange Dutch travel advice currently applies to both Germany and Austria. This means that only necessary travel is allowed.

A number of interest groups and FlixBus have recently filed a case to challenge a license and subsidy to Dutch Railways NS for operating a night train connection to Austria. According to AllRail, FlixBus and Federation Mobility Netherlands (FMN), the decision of the Dutch government to add the ÖBB NightJet to the existing main rail network concession is contrary to European law. However, this has not hindered the start of the first Nightjet.