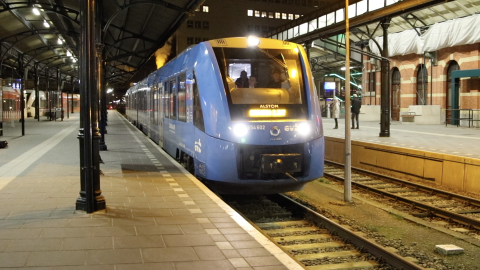 Europe funds hydrogen train in the Netherlands with 25 million

The European Investment Bank (EIB) will fund 25 million euros for the purchase of four hydrogen trains and the construction of a hydrogen filling station in Groningen in the Netherlands. The amount is part of a 3.4 billion euro investment package in sustainable development. Of this, 700 million euros are spent on sustainable mobility.

The four hydrogen trains will run on the Northern Lines in the Dutch provinces Groningen and Friesland. Initially, the filling station will only serve these trains, but may eventually also be used by road traffic and inland shipping. The expected costs for this project are 66 million euros. Europe accounts for 25 million euros of the total amount.

Hydrogen instead of diesel

The new rolling stock provides additional capacity for services on the non-electrified rail network in the Northern Netherlands, including a small new extension from Veendam to Stadskanaal. From 2024, the province of Groningen wants to run hydrogen-powered trains between the city of Groningen and Stadskanaal and on the Wunderline between Groningen and Bremen in Germany that is to be constructed. At the end of last year, the province announced that the aim is to have the clean trains on track by 2025. In 2035, the province wants to replace all Groningen diesel trains with hydrogen-powered trains.

As part of the feasibility study into hydrogen trains in Groningen, test runs were conducted in March 2020 with a hydrogen train from Alstom between Groningen and Leeuwarden. It was a collaboration between the province of Groningen, Arriva, ProRail, Alstom and Dekra. Energy supplier Engie supplied the green hydrogen and the refueling installation.

Last week, train builder Alstom talked about its hydrogen strategy in an online webinar. Muslum Yakisan, president of Alstom DACH (Germany, Austria and Switzerland) also focused on the use of hydrogen filling stations for multiple modalities. “Building and developing hydrogen trains is not the only aspect of getting more hydrogen and less diesel propulsion onto the track. We have noticed that hydrogen filling stations are only sparsely funded and supported if they only serve to refill trains.”

“It is time to overcome this hurdle so that petrol stations can also be used for other means of transport, such as heavy trucks or garbage trucks in cities. There is enormous potential, and this could give more momentum to expand the use of hydrogen to different modes of transport.”

Groningen also plans hydrogen trains for the future Wunderline to Germany. Last week it was announced that the province wants to start work on the track between Hoogezand and Winschoten this year to make the arrival of the Wunderline possible. To this end, faster track switches will be installed between Hoogezand and Zuidbroek and the ground under the track will have to be reinforced to enable a higher speed of the trains. The province is also preparing for a doubling of track between Scheemda and Winschoten.