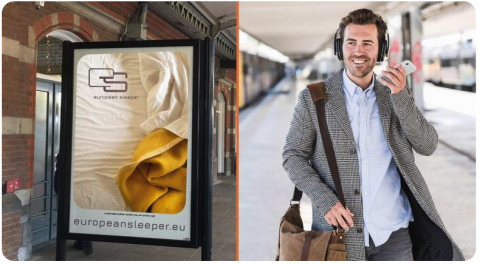 European Sleeper, a brand new Dutch railway company dedicated to night trains, is planning to launch a new night train service together with RegioJet connecting Prague – Dresden – Berlin – Amsterdam – Brussels. The new international open access train line plans to be launched in 2022. It will soon be submitted to request railway capacity, according to the companies.

From 2022, the new night train should depart in the early evening from Prague via Dresden and Berlin to Amsterdam and terminate in Brussels, where it will have a morning arrival – ideal for meetings for example with the EU institutions. The return trip will leave Brussels early evening, stop at Amsterdam on the way to Berlin, Dresden and Prague, where it will have a convenient arrival time in the morning. The intention is to initially run the night train three times a week, and then scale it up to a daily connection.

European Sleeper and open-access Czech operator RegioJet will cooperate with other railway entities to operate the train and sell tickets on individual markets involved, such as in the Czech Republic, the Netherlands, Belgium and Germany. The trains will offer travelling both on seats and  in sleeping compartments and have full RegioJet on-board service – including free internet access, free coffee and other services. If all goes to plan, it will be the first time since Lovers Rail, which operated between 1996 and 1999, that a private railway company such as European Sleeper enters the Dutch market.

With the new night connection on the route Prague – Berlin – Amsterdam – Brussels, RegioJet and European Sleeper actively support the Pan-European initiative for the development of environmentally friendly night train transport. At the same time, preparation of this connection is a part of an active approach towards the EU initiative – Year of Rail in 2021, say the companies. “Amsterdam, Brussels, Prague, Berlin and Dresden are destinations that are ideal for travelling by night trains both for tourist and business purposes and launch of such a service can make railways more attractive for travelling between key European capitals”, they say.

European Sleeper is a community-based initiative established in February 2021. The company was founded by two Dutch entrepreneurs who are committed to the cause: Elmer van Buuren of Train2EU and Chris Engelsman of Noord West Express. New about the operator is that it is organised as a cooperative, which makes buying shares easy and accessible for both private individuals and investors.

“Now we involve the community in the build-up of European Sleeper by setting up the company in the shape of a cooperative. This will enable the issuing of shares, available also to smaller investors.” European Sleeper will start  raising money from May.

RegioJet is therefore investing in further growth of its long-distance train fleet. It has currently taken over the first two of the fifteen Bombardier TRAXX MS3 multi-system locomotives from the manufacturer. In addition to the new RegioJet locomotives, it intends to make significant investments in expanding its rolling stock in 2021. In addition to the 50 railway coaches that the company acquired recently, at least another 70 coaches will be added in 2021. This will mean a further increase in the fleet of up to more than one third to 300 coaches for day and night long-distance connections.

In addition to the Prague – Berlin – Amsterdam – Brussels connection, RegioJet and European Sleeper plan to develop further night train connections on other routes in Central Europe together.