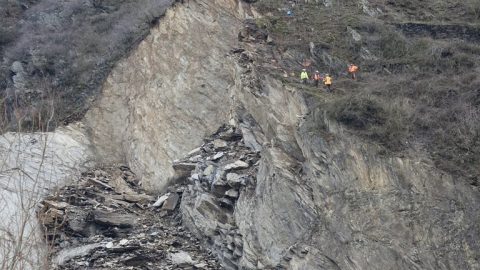 A landslide at the Middle Rhine Valley near Kestert in Germany has blocked the underlying railway, with no traffic possible the entire week. On Monday 15 March, 5,000 cubic metres of stones and rubble came down, not only affecting the rails but also blocking part of the B42 federal highway between Kamp-Bornhofen and Kaub. Currently, geologists and special forces are securing the area and unblocking the way for transportation.

European rail freight is heavily impacted by the landslide, as it disrupts traffic though Europe’s most heavily used freight line: the Rhine-Alpine corridor. According to reports from the site, freight traffic diverts through the left bank of the Rhine using the Bingen route. However, this is not enough since long-distance trains are excluded from this diversion, a situation that also affects the bustling Genoa-Rotterdam route.

The significant landslide seems to be the product of heavy rains and general bad weather conditions. Nevertheless, this is only the cause of the event that appears to derive mainly from the landscape’s distortions caused by heavy freight vehicles’ vibrations.

Specifically, vibrations caused by freight trains seem to be the main reason behind the phenomenon. According to Willi Pusch, chairman of the initiative against railway noise in the Middle Rhine Valley, this is the seventh rock-falling event in the region. His citizen’s initiative has warned multiple times about the consequences of bypassing freight trains that cause tremors to the mountain slopes.

With the same perspective, the region’s Pro Rheintal citizen network said that weather is not the only cause of the landslide. In contrast, they believe that rocks might crack due to wind and rain, but they collapse because of the heavy trains and the vibrations they cause. As a result, they made an open call to the German state to issue a speed limit and night driving bans for freight trains travelling through the area.

Experts working on the site mentioned that clearing processes will conclude by the week’s end. By then, traffic could return to normal. DB Cargo also confirmed that there is a reliable forecast on the way concerning the route’s navigability.

However, concerns about whether the route will be suitable for freight trains are more acute than ever. With the region’s residents partially blaming rail freight for the event and calls for extended measures, it is pretty doubtful if freight traffic could resume smoothly in this route. Even if it does under different regulations, the situation will be entirely different for Europe’s busiest rail route and operators using it. Looking for alternatives could be one solution, but all actions will be coordinated after the completion of site works and the official authorities’ report for the route’s future use.

Watch a video of the landslide here: