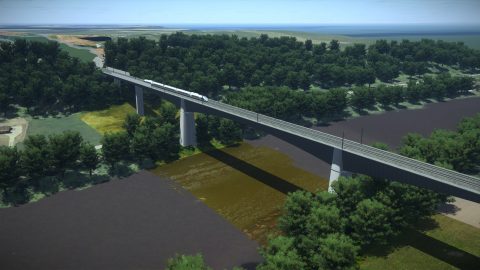 A new tender will be announced for the construction of the longest railway bridge of Rail Baltica across the river Neris in Lithuania. Infrastructure manager LTG Infra is clarifying and adjusting the provisions for the complex project after remarks from the earlier tender. The new bridge with an estimated value of 5.8 billion will be part of a new railway between Kaunas and the Lithuanian-Latvian border.

The construction of a railway bridge across the river Neris is a large and complex project. It will be the longest railway bridge not only in Lithuania, but in all of the Baltic States. “The new railway bridge is one of the biggest challenges and the most technically complex engineering structure in Rail Baltica railway construction. It will not have any support in the water”, says LTG Infra General Director Karol Sankovsky.

Infrastructure manager LTG Link started the search for a contractor in December last year, but now has decided to update the contract. “In order to ensure that the terms of purchase of such a complex object are completely clear to all suppliers, it was decided to adjust the provisions of the tender documents. This includes the technical design, worksheet, contract condition, and technical specifications”, says Sankovsky.

The proposals and remarks on the tender launched in late December, the tender conditions are currently being updated. The procurement requirements are being clarified according to the suppliers’ questions and proposals. The updated documents will be shared with all potential suppliers through a market consultation. After the new feedback has been analysed, a new tender will be announced. The tender itself is scheduled to begin in March or April.

According to Sankovski, this competition, as well as other works of the Rail Baltica project and future tenders, may become an important “pillow” for the Lithuanian economy in the face of Covid-19. The contractor who wins the tender will not only have to build a bridge. Also part of the task is to tidy up the environment, install noise-reducing walls, reconstruct nearby water supply and other engineering networks, and reconstruct drainage structure