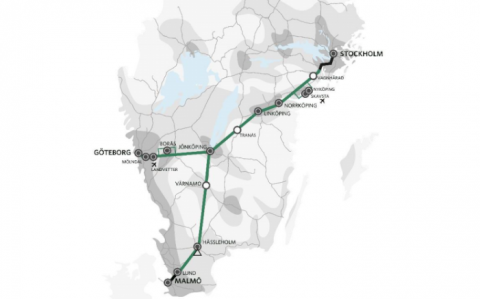 The Swedish Transport Administration Trafikverket presented four proposals for the three new high-speed main lines last week. In order to meet the government’s cost framework of 20 billion euros, the design needed to be reconsidered both in terms of number of stations and their locations, cutting costs by placing several stations outside of the cities.

To build new high-speed railway lines with centrally located train stations. a significantly higher amount of money than the 205 billion proposed in an agreement between the government is needed. In June 2020, the government entered into an agreement with the Center Party and the Liberals, and commissioned the Swedish Transport Administration to develop various proposals on how the new main lines can be built at a cost of a maximum of 205 billion Swedish Krona (20 billion euros).

In the investigation, the Swedish Transport Administration does not take a position on which of the three alternatives is the best or which technology should be used. The question of whether and how to build new main lines is politically much debated in the country. There is no certainty yet if any of the alternatives will eventually become a reality.

The Swedish Transport Administration estimated the costs of planning the railway central through the cities much higher, billion euros more than the previous cost estimate of 2017. The previous proposal, which regions and municipalities had approved in preliminary agreements through the Sweden negotiations was 24 billion euros which is now raised to 29 billion euros.

“The opportunities for large cost savings in the current system design are very limited”, says Ali Sadeghi, the Swedish Transport Administration’s program manager for the new main lines. In order to stay within the budget, most of the stations are planned outside the city. City passages need more expensive components such as noise protection, temporary traffic solutions, complex adaptations (bridges, tunnels), landlessness and business encroachment and complicated mass handling.

In Linköping, politicians have long fought to get the new railway drawn through the city. In Norrköping, the situation affects the entire planning and rebuilding of the city, something that has already begun. Two Linköping local politicians said to Swedish news medium SVT that the Swedish Transport Administration’s investigation does not show any good proposals.

There is one proposal that has more of the stations central in the cities, but then there will be no stations in Vagnhärad, Nyköping, Skavsta Airport, Tranås, Landvetter Airport or Mölndal. In the western and southern parts of the system in connection with the big cities, the fourth proposal RU4 is designed for both high-speed trains and regional trains. In other parts it is only designed for high-speed trains. It is a situation without regional train traffic on the common route between Stockholm and Jönköping, which creates space for more long-distance trains in the system in total. 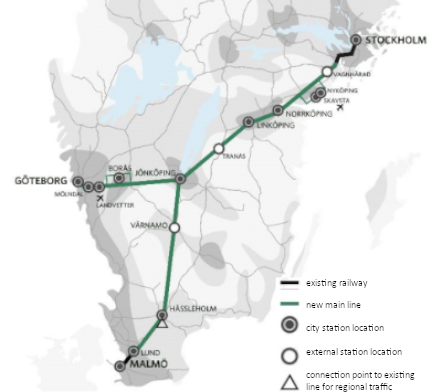 The fourth proposal, with more stations placed centrally in the cities, but with less room for regional trains and a cutback in the number of stations.

Faster construction, but not cheaper

Recently, the construction company Skanska presented a study that claims it would be much faster to build an elevated high-speed railway on pillars, instead of on the ground. The construction time would be about half as long, nine years.

The Swedish Transport Administration has looked at this construction technology, and several others, in its new investigation. The authority does not believe that the pillar technology would work for the entire railway, but instead could work for some sections. The potential use of these land bridges are not included however in the cost assessments. In the report, it is also said that land bridges have clear challenges in the form of climate impact, noise dispersion and visual barriers.

For all four proposals, Trafikverket included ballasted track to limit the investment costs. Originally, the plan was to use slab track, with the tracks in concrete. It is more expensive than the traditional method with the rails on gravel, but cheaper in to maintain. Ballasted track has a lower investment cost, but a higher maintenance cost and is not considered suitable for speeds above 300 kilometres per hour.

The issue of the new high-speed trains and which of the proposals is the most favourable is now back on the government’s table. In dialogue with other parties, the Social Democrats and the Green Party should decide what the next steps will be.