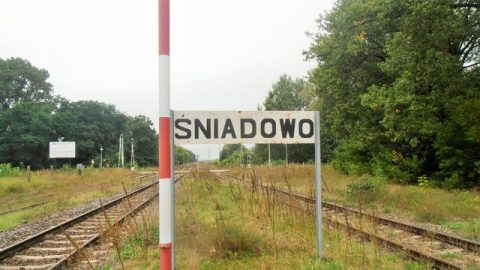 Passengers trains to return on Polish railway line after 30 years

Polish infrastructure manager PKP Polskie Linie Kolejowe SA signed a contract for project documentation for the renovation of the line from Śniadowo to Łomża. After 30 years, passengers trains will return on the Polish railway line Polish railway. The railway line will increase accessibility of residents in the region who do not have access to rail transport, as they will gain convenient train connections to Warsaw and Białystok.

With the renovation of the railway line from the city of Łomża in North-Eastern Poland to the town Śniadowo in the northeast of the country, passenger trains will return to the city of Łomża after more than 30 years. Infrastructure manager PKP Polskie Linie Kolejowe (PKP PLK) signed a contract for 3.3 million Polish złoty (740.000 euros) for the development of the project documentation, which will be done by 2023. The contractor is a consortium of companies led by Biuro Realizacji Inwestycji Koltech Inwestor Sp.

Modernisation of the line

Construction of new tracks and turnouts is planned along the 17-kilometer route. The contract also includes installing computerized railway traffic control devices that will ensure safe passage of trains. The modernization will increase the capacity of the line so that more trains can run at higher speeds. The assumed maximum speed of passenger trains is 100 km/h, but a speed of 120 km/h will also be analysed. The level of safety in rail and road traffic will be increased by the reconstruction of several rail-road crossings.

The contractor will prepare project documentation, update the feasibility study and application for co-financing the construction from the funds of the Regional Operational Program of the Podlaskie Voivodeship (region) by the European Union. The project documentation will be ready in the second quarter of 2023. The construction works are planned to be carried out after this.

“The Łomża region badly needs a railway connection. Therefore, on behalf of the Voivodship Board, I am pleased that a very important step has been made on the way to the implementation of the investment, which will be financed from EU funds under the new regional program”, says Artur Kosicki, Marshal of the Podlaskie Voivodeship.

The contractor of the documentation will also consider an extended variant of the investment – the reconstruction of the track system at the Śniadów station in order to ensure better train traffic. The construction of a railway link will be analysed, which will shorten the travel time, as it will enable direct passage of trains from Łomża towards Białystok, without needing transfer at the Śniadów station. The contractor will prepare full documentation necessary to start the works.

Also, the train station in the city of Łomża will be rebuilt. A so-called multimodal platform will be realised, supporting both rail and bus connections. The implementation of the investment will have a positive impact on the possibility of developing rail freight transport. On the new tracks, heavier and longer freight trains of upto 600 meters can reach Łomża.

The future implementation of the investment is planned as part of the Podlaskie Voivodeship Regional Operational Program funds for the years 2021-2027. In August, the local government of the province submitted a request for works on the section from Lomza to Śniadowa and also to Łap. The city of Łomża was indicated in a resolution of the Council of Ministers on the establishment of the program of Supplementing the Local and Regional Railway Infrastructure, as a town with a population of over 10,000 people who do not have access to the passenger rail.

“Each investment that allows the development of railways in the regions is important due to the elimination of the communication exclusion of residents. Providing conditions for the return of the passenger railway to Łomża, after almost 30 years, is another step towards building a safe, comfortable and predictable railway in Podlaskie Voivodeship and Poland”, says Andrzej Bittel, secretary of state at the Ministry of Infrastructure.