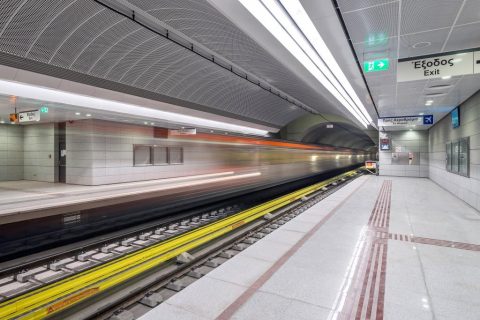 Alstom, as part of a consortium with construction group Avax and tunneling construction company Ghella, has won the public procurement tender for the construction of the first section of Athens Metro Line 4. The technical and financial offers by Attiko Metro’s Board of Directors were recently approved. Alstom will provide rolling stock, signaling and infrastructure solutions, with a share of approximately 300 million euros in the 1.5 billion euro project.

The entire new Line 4, known as the “U-Line” due to its shape, will run through the most populated areas of central Athens and crosses existing metro Lines 2 and 3. It will cover 38 kilometres and a total of 35 stations, and consists of five sections. The current project refers to section A, Goudi-Alsos Veikou, consisting of 12.8 kilometres and 15 stations. This section is expected to take 8 years to complete. Alstom will supply 20 fully automated, 4-cars Metropolis trains, the state-of-the-art CBTC solution Urbalis 400, Iconis security and control systems and the Hesop energy saving system.

Section A of Line 4 has been designed with the purpose to serve a number of densely populated areas of the city, as well as a number of important buildings and facilities, such as hospitals, educational institutions, court houses and premises of public organisations or ministries. It is estimated that Section A of Line 4 will serve at least 341,000 passengers on a daily basis in 2030.

“Athens Metro Line 4 is one of the biggest turnkey projects in Europe, covering a comprehensive portfolio of rolling stock, signaling and infrastructure. It is another step in Alstom’s long-standing presence and cooperation in Greece”, says Gian Luca Erbacci, Senior Vice President of Alstom Europe. Alstom was also involved in the construction of both metro Lines 2 and 3 of the Athens Metro (inaugurated in 2000), the Athens Suburban Railway and Metro Line 3 extension to Piraeus.

The main tunnel of the entire project will be a double track tunnel, with an approximate inner diameter of 8.5 metres and an outer diameter of 9.5 metres. The construction will be done with Tunnel Boring Machines (TBM), which will be designed and equipped with state of the art technology and taking into account the anticipated ground conditions, the hydrogeological and geotechnical conditions in the project.

The tunnel sections and underground stations will be constructed using the NATM method, a method of modern tunnel design and construction employing monitoring to optimize various wall reinforcement techniques based on the type of rock encountered as the tunneling progresses. This has the advantage of employing inherent geological strength available in the surrounding rock mass to stabilize the tunnel wherever possible rather than reinforcing the entire tunnel.

Another large project in Athens is the extension of Metro Line 3 to Piraeus, which is in an advanced stage of construction. It includes a 7.6 kilometre long tunnel and 6 new modern stations (Aghia Varvara, Korydallos, Nikaia, Maniatika, Piraeus and Dimotiko Theatro) as well as seven ventilation intershafts. On July 6, 2020, the first three stations of Aghia Varvara, Korydallos and Nikaia were commissioned. The extension brings about significant socio-economic and other benefits, such as the reduced carbon footprint and private vehicle circulation, which is 60 tons less of CO2 and 11,000 cars per day, according to Attiko Metro. The entire Line 3 Extension is expected to be commissioned in the summer of 2022.