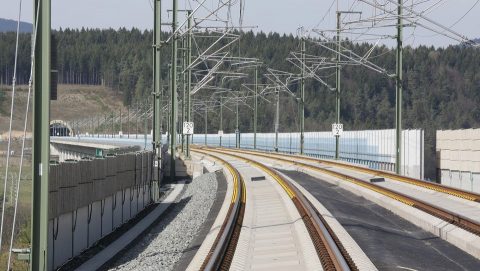 Austrian construction company PORR won a major deal in the United Kingdom. It will produce and deliver slab tracks for the planned HS2 line between London and Crewe. To this end, the supplier will establish a new factory in Somerset.

HS2 Ltd, the government-funded entity that is responsible for the project implementation, awarded PORR with a contract, which is worth at 260 million British pounds (around 286 million euros). The deal consists of supplying slab tracks for almost entire high-speed route between London and Crewe excluding tunnels and some specialist structures. To perform the order, PORR in a partnership with Aggregate Industries UK will construct a new dedicated factory near Shepton Mallet in Somerset. This will help to create up to 500 jobs over the life of the contract.

PORR will deploy its modular construction system on the planned HS2 route. It was developed together with Austrian Federal Railways (ÖBB) and is known as Slab Track Austria. The solution includes the manufacture of slab track segments at the mentioned facility in Somerset and their deployment on-site. After installing the slab tracks, the rails will be fitted in them. “This type of system – which is used on several high-speed railways across the world – will reduce maintenance costs and improve performance in comparison to traditional ballasted track,” HS2 Ltd explained its decision to choose PORR’s solution.