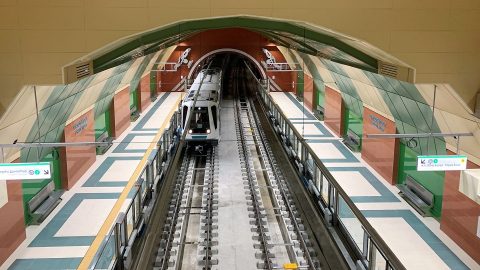 The third metro line was put into operation in Sofia. It crosses the Bulgarian capital from northeast to southwest providing fast and reliable communication between the city centre and the remote neighbourhoods. Four more stations will be added to the route at the year’s end and in early 2021.

Starting from Wednesday, 26 August, the first stage of Line M3 is functioning in Sofia Metro. Currently, the route includes the eight-kilometre section with eight stations. Its estimated passenger traffic is up to 60,000 people a day. To travel from the termini of Hadzhi Dimitar and Krasno Selo to the city centre, the passengers need less than 10 minutes.

When the second stage becomes operational later this year and in the beginning of the next year, the new line will have a length of 12 kilometres and will consist of 12 stations. Its southwest terminus will be at Gorna Banya railway station. Both stages of the project cost around 974 million leva (around 498 million euros). Of them, 661 million leva were allocated from the EU funds and 313 million leva were financed by the Sofia Municipality.

Another feature of the new route is half-height platform screen doors at the stations that were installed due to the safety reasons. They are automatically opened when a train arrives and are closed when it departs. In addition, Line M3 is equipped with Communications Based Train Control (CBTC) Trainguard MT (TGMT) system from Siemens Mobility that allows the trains to stop at the stations very precisely.

Metropoliten JSC, a municipal company that operates Sofia Metro, ordered 20 three-carriage Inspiro trainsets from Siemens Mobility. As of today, most of the vehicles are already in Sofia, the last unit of this batch will be delivered by April 2021. In March 2019 the municipal operator booked 10 more trains of the same type. All the vehicles have an open gangway connection between the carriages.