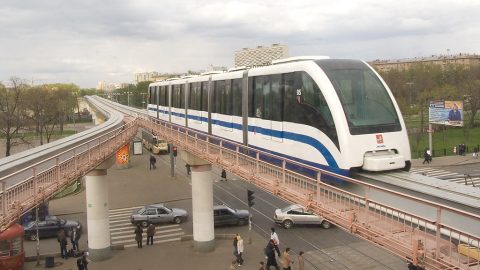 Uncertain future for Russia’s only monorail

The Moscow Monorail, Russia’s only public transport network of this kind, is threatened with closure. It is losing popularity among passengers for the past several years. The final decision will be approved after online voting of the customers.

Moscow city authorities plan to close the local monorail. Such messages have been circulating in Russian media in recent months. Every time these rumours were refuted. However, the situation has changed last week. On Thursday, 6 August, the Interfax news agency reported that the future of Moscow Monorail is uncertain. To address the issue, the Moscow Department of Transport is planning to launch online voting among the passengers that will decide whether this network is necessary or not.

Meanwhile, Vedomosti, the Russian popular business daily newspaper, informed that the Moscow city authorities are really considering the possibility to close down the monorail system. “The Government of Moscow will soon close the monorail line, which is a part of the metro system and is designated on the metro map as Line 13. Three officials from the mayor’s office told Vedomosti about this. The exact date of closure has not yet been determined, it will most likely happen in August, two interlocutors clarify,” the newspaper states.

Moscow Monorail was launched in 2004. The network consists of a single line with six stations and has a length of around 5 kilometres. It connects several metro routes in the northern part of Moscow. The construction works cost 6.5 billion rubles (or around 75 million euros according to the current rate). The highest passenger traffic on the Moscow Monorail was set in 2014 when 5.5 million passengers travelled this mode of transport.

Afterwards, this figure was decreasing. In 2019 only 1.5 million customers used the monorail system. At the same time, it generates significant amounts of losses: around 800 million rubles (9.2 million euros) a year. The main reason for losing popularity by the Moscow Monorail is the launch of new metro lines and stations in the nearby neighbourhoods.