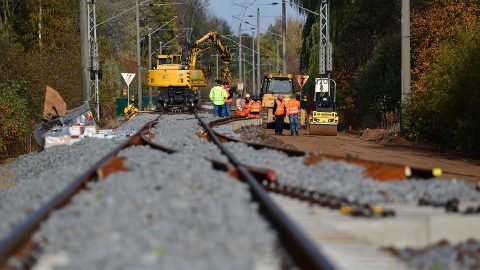 Reactivation of disused tracks to improve rail connectivity in Germany

Better and faster trains, improvements in rail infrastructure and implementation of new digital innovations. These are the solutions that help railways to attract more passengers. Meanwhile, more than 3 million people in Germany could receive access to rail services just by reactivating the disused tracks. This will improve their way to work or other destinations and increase the competitiveness of railways.

291 cities and municipalities in Germany with over three million inhabitants could be connected to the rail network via reactivation of the disused and abandoned tracks. Such a conclusion was made by the Association of German Transport Companies (VDV), which represents transit authorities and public transport companies, together with Allianz pro Schiene, an umbrella organisation that promotes safe and environmentally friendly rail transport. Both associations propose to relaunch 238 railway routes across Germany with a total length of 4,016 kilometres.

“The German government wants to double the number of passengers on the railways by 2030 and increase the market share of rail freight transport to 25 per cent. This will only work with a consequent expansion of the infrastructure. The reuse of decommissioned railway lines is an indispensable part of a growth strategy that puts an end to the decades-long shrinking of the rail network,” Dirk Flege, Managing Director of Allianz pro Schiene, said.

Two umbrella organisations noted that there had been made some improvements to rehabilitate the disused tracks in the previous periods. However, they are not enough as much more tracks were closed at the same time. According to Allianz pro Schiene, there were reactivated 933 kilometres of tracks for passenger train traffic and 364 kilometres of tracks for freight transport in Germany between 1994 and 2020.

Meanwhile, 3,600 kilometres of tracks were closed for the regular train traffic. As a result, the length of the German railway network currently decreased from 44,600 to 38,500 kilometres. “By reactivating disused railway lines, we can stop and reverse the decades of rail withdrawal from the surface. This is a recipe for success for a better traffic mix in the future,” Mr Flege added.

“If the railway is to become the means of transport of the 21st century, then we have to keep an eye on the whole country and not just the big cities and conurbations or long-distance traffic,” noted Jörgen Bosse, Chairman of the VDV Committee for Railway Infrastructure and Managing Director of Usedomer Bäderbahn.

According to him, around 70 per cent of people in Germany live in medium-sized and small towns or in rural areas and, therefore, a key focus should be here. “For this large majority of the population, we need efficient and environmentally friendly rail transport offers. It’s about climate protection, but also about the equivalence of living conditions,” he emphasised.

It’s fully clear that the old-fashioned railway development philosophy is doomed to die. Burocracy, technocracy and project costs are exploding uncontrolable, and manageability, ROI and customer focus are melting like the north pole ice.