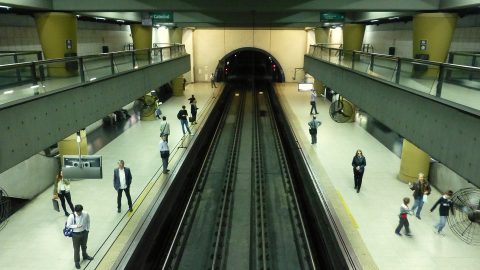 Published on 21-07-2020 at 10:47
Olleros station on Line D of the Buenos Aires Underground, source: Wikimedia Commons

Siemens Mobility will deliver the Trainguard MT solution, its own CBTC system for automatic train control. According to the deal with Subterráneos de Buenos Aires (SBASE), a government corporation that owns the metro network in the capital of Argentina, the German company will install the onboard units on 24 existing metro cars and will deploy a radio system, electronic interlockings, wayside equipment.

The radio-based CBTC technology provides real-time data on vehicle position and speed conditions, allowing system operators to safely increase the number of vehicles on a rail line. This results in a greater frequency of train arrivals and will allow SBASE to accommodate more passengers on its system. All elements of the system will be coordinated by a newly established operations control centre. In addition, Siemens Mobility will deliver a new passenger information system for Line D.

The Buenos Aires Underground is the oldest metro system in Latin America. It was launched in 1913. Line D was opened in 1937. Currently, it has a length of 11 kilometres and includes 16 stations. The mentioned line connects the historic Plaza de Mayo, and Congreso de Tucumán, located in the northern part, close to the borders of the city of Buenos Aires. Siemens Mobility will equip the entire route with its Trainguard MT solution. It is the third contract between the German company and SBASE to equip the Buenos Aires Metro lines with the CBTC signalling technology.