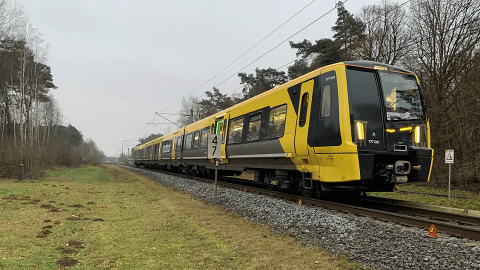 Rail link to airport a top priority for Liverpool

Despite the corona crisis, Liverpool John Lennon Airport is still interested in the construction of the rail link to the city centre. It will facilitate the connectivity between the airport and the adjacent region as well as to the planned high-speed lines.

“Many projects happening around the city region are critical to grow the airport in its connectivity. I think having a rail link into the airport remains a top priority. Probably even more so now,” the Liverpool Echo newspaper quoted the speech of John Irving, chief executive of Liverpool John Lennon Airport (JLA), at the Liverpool BID Company’s second virtual Visitor Economy Panel that took place last week.

Connection to HS2 and HS3

It is unclear what type of airport rail link, heavy or light, will be implemented in Liverpool. In the early 2000s, there was the Merseytram project, a proposed tram network in the city of Liverpool. This light system should have included the tram line to Liverpool Airport. In October 2013, this project was cancelled before it started due to funding issues. Meanwhile, the Liverpool John Lennon Airport Master Plan to 2050 only implies on the possible rail link to the so-called High Speed 3 line (HS3; other names are High Speed North or Northern Powerhouse Rail, NPR) that connects Liverpool to Manchester and Leeds.

“Northern Powerhouse Rail (NPR) is a major strategic rail programme to provide faster and more frequent rail connectivity to transform rail connectivity between the key economic centres. It has the potential to make it easier, cheaper, and faster to travel to LJLA. The Airport therefore strongly supports the delivery of NPR and future investment to enhance the surface transport connections between Liverpool South Parkway and the Airport,” the document reads. It is worth to add that the UK governments have not adopted the exact decision regarding the future of the HS3 project.

At the moment, Liverpool Airport has no direct rail link to the city centre. Hunts Cross, the nearest train station, is located in 3.5 kilometres. Therefore, the passengers need to take a shuttle bus to the railway station. This bus service is operated by Arriva North West, a subsidiary of Arriva UK Bus. From the Hunts Cross station, the passengers are able to travel by the trains of five railway operators: East Midlands Railway, Merseyrail, Northern Trains, Transport for Wales and West Midlands Trains.

As part of the Liverpool City Region’s desire to achieve “Net Zero” status by 2040, the use of cars must be reduced. Providing a rail link to John Lennon Airport, as a loop line from Ditton via Hale and on to Liverpool South Parkway would attract air passengers from Crewe and further South as well as providing local commuter services. Opening up the disused outer city rail link and connecting it to the proposed airport rail would also be beneficial. Have any such plans been costed?