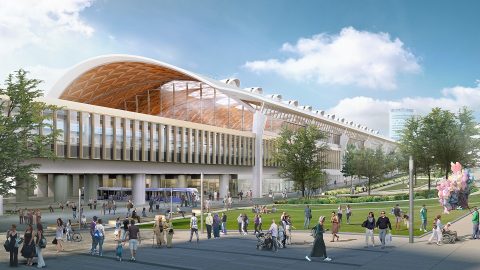 The HS2 project is gradually moving further. Birmingham City Council has issued planning permission for Curzon Street station. It is the first railway station on the future high-speed mainline to gain this approval.

The planning committee of Birmingham City Council has approved three planning applications for the new Curzon Street station and the surrounding landscaping on 23 April. It will be constructed as a zero-carbon station due to adopting several environmentally friendly technologies: capturing rainwater and sustainable power generation, with over 2,800 square metres of solar panels located on platform canopies.

This facility will also provide a natural habitat for local wildlife: it will have parkland lawns, rain gardens to capture water, wildflower grassland, insect and bird boxes, forest-scale tree planting across the site, and an area of new broadleaf woodland. “Eco-friendly innovations are a fundamental part of our plans, with the station designed to achieve zero carbon emissions from day-to-day energy consumption,” said Matthew Botelle, Stations Director at HS2 Ltd, the government-funded company that develops the project of the high-speed railway from London to Birmingham, Manchester and Leeds.

Between present and future

The design of the planned Curzon Street station was developed by WSP and Grimshaw Architects LLP. HS2 Ltd has been working with these companies since autumn 2018 when they presented the initial design of the station. Afterwards, the project has been discussed with the public. According to the approved design, the Curzon Street station will incorporate the existing Grade 1 listed Old Curzon Street building, linking it to the new station’s eastern concourse at New Canal Street, and takes into consideration existing local heritage such as the Grade II listed Moor Street Station and Woodman Pub.

In addition, the planned station will become a multimodal hub as it integrates several modes of transport. The Midland Metro runs alongside and underneath the station, while accessible pedestrian routes lead to local bus services, Sprint rapid transit bus services and other train services. Cycle parking has also been incorporated, providing space for more than 550 bicycles. Procurement for the company to construct the station has already started, with Invitation to Tender set to be launched in the summer.