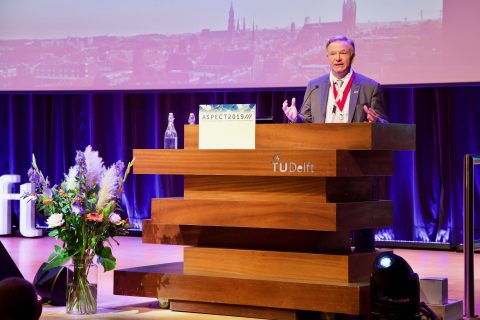 ‘Rail has to be more resilient to major power failures’

To prevent that the entire rail operation gets distorted in the event of major power failures, the railway industry should evaluate the robustness of its systems, says George Clark, president of the Institution of Railway Signal Engineers (IRSE). In London and southern England, trains and metros came to a standstill on Friday, October 4, and traffic lights were switched off after two power stations of the national grid had failed.

Clark gave a presentation on Wednesday during the Aspect conference in the Aula of Delft University of Technology with the main theme ‘Resilience’. Due to the power failure during the evening rush hour on the 4th of October, there was traffic chaos. The power supply of two metro stations of the London Underground also failed and regular train traffic to and from London was affected.

The power supply of the two stations of the national grid was restored after about fifteen minutes, but for the railways, the negative impact was much bigger, Clark said. “As a result of this power failure, we had to restart signalling systems, critical communication systems were out of order and the lights and lifts in subway stations were down. This meant that subway stations on the Victoria Line had to be evacuated. We were very lucky that it ended well and no one was hurt.”

“Because two power stations fell out quick after each other, the power supply dropped considerably with about 1.4 gigawatts. We have a power facility in Greenwich that switches on when the metro’s power supply fails. But we are not prepared for this amount of energy loss”, Clark noted.

According to Clark, it must be ensured that the national grid is more reliable, so that it has sufficient resilience to deal with failures. In addition, the rail sector must ensure that it has a fallback possibility itself. “We have to investigate how resilient our system is in relation to the national electricity network.”

“We must look carefully at the robustness of our systems. It is quite exceptional that two power plants fail almost simultaneously. At the same time, we have to validate assumptions. We must investigate whether this is something that occurs once every hundred years or whether it is more likely that it will happen again in a short time. If it is more likely to repeat itself, we must take measures.”