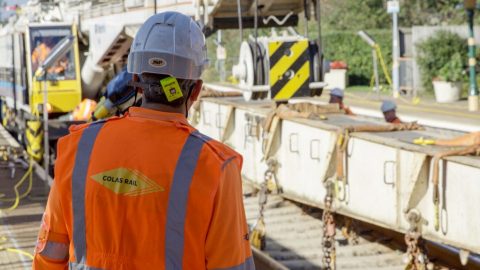 Colar Rail UK, a subsidiary of Colas Group, has obtained three major contracts from infrastructure manager Network Rail. The British rail freight and maintenance company will supply signalling, telecoms, other equipment and provide rail haulage service. The total value of the deals is around 1.8 billion Euros.

The largest contract provides track renewals, signalling, electrification and civil works for south of England. The contract spans from 2019 to 2030 and is valued at around 1.7 billion Euros. The works will be carried out in a partnership with AECOM as a designer on the Anglia, South East, Wessex, Western and Wales routes.

Two other deals have a total price of 98.5 million Euros. According to the second contract, Colas Rail Uk is obliged to deliver signalling and telecoms frameworks for the western region in 2019-2024. It includes stand-alone level crossing renewals, life extension works, telecoms renewals and related civil engineering works valued at circa 85 million Euros.

Colas Rail UK is one of the largest track contractors in the United Kingdom with a market share of around 40 per cent. The company has also a licence for rail freight operations. It is a part of Colas Group owned by French industrial holding Bouygues. The group has a large portfolio of projects in 50 countries.