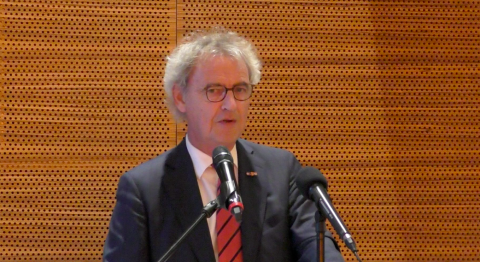 NS CEO: journey time Amsterdam – Berlin to be reduced to four hours in 2023

Dutch Railways (NS), Deutsche Bahn, the Dutch and German Ministry of Infrastructure and the German states involved made far-reaching agreements during the rail trade fair InnoTrans to accelerate the intercity service between Amsterdam and Berlin. The goal is to travel in about four hours instead of the current 6 hours and 22 minutes between the two cities by 2023. This was announced by NS CEO Roger van Boxtel on during a networking dinner in the Dutch embassy of Berlin.

Van Boxtel referred during his presentation to the ambitions that former NS director Van Heukelom already expressed in 1860 for the acceleration of the intercity between Amsterdam and Berlin. “Since then, nothing has happened to improve the speed of our trains.” He said that he was therefore pleased that concrete steps were now being taken on both the Dutch and German sides.

NS has started a tender for the lease of twelve fast Siemens Vectron locomotives that reach a maximum of speed of 200 kilometres per hour. These locomotives can run in both countries so that no locomotive change is required on the border. “Maybe next year we can say that the journey does not take 6,5 hours, but only 5,5 hours. That is already an hour shorter than before. ”

Railway company Deutsche Bahn announced on Tuesday that it would invest hundreds of millions of Euros in ‘ICE quality’ new trains, to be in service between Amsterdam and Berlin, starting from 2023. These vehicles will shorten the journey time by twenty to thirty minutes. “I hope that in 2023, when we have the new locomotives and perhaps also improvements in infrastructure, we can say that it is possible to achieve the four-hour goal.”

NS, Deutsche Bahn and the authorities involved are going to carry out a quick scan within six months to significantly shorten the travel time. In this context, various scenarios are examined, which concern both adaptations in the Netherlands and Germany. “For example, without a locomotive change, we have a quarter of an hour’s gain, but in order to achieve this, the timetable needs to be adjusted on the German side,” Van Boxtel said.

In his opinion, there are more examples to be mentioned in which both countries have to make adjustments to achieve a significant gain in journey time. One of the things that the people involved want to investigate is whether it is possible to stop at fewer stations.

Member of the board of directors of the European Passenger Federation Arriën Kruyt is positive about the agreements made in Berlin. “The German state secretary Ferlemann has given Deutsche Bahn the order to accelerate the rail service on Tuesday. It is looking good because political pressure is now being exerted on both sides. ”

The network meeting was held Wednesday by the Dutch embassy in Berlin, the German-Dutch Chamber of Commerce and Dutch trade magazine SpoorPro.