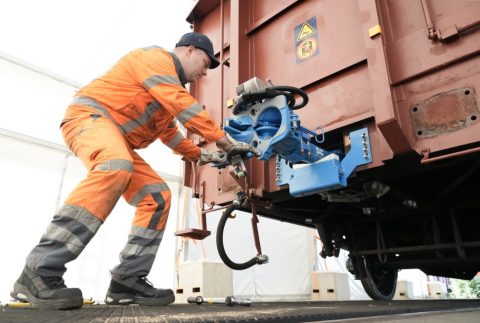 Germany gets ready to speed up DAC retrofitting with 150 workshops

The successful test runs of Digital Automatic Coupling (DAC) trains around Europe bring some rapid developments in Germany. Deutsche Bahn is eager to set up 150 pop-up workshops for the DAC retrofitting of wagons. First, the company will prepare its wagons to receive the DAC system. This process will complete in early 2023. After that, wagons will be able to convert to the DAC system in workshops around the country.

The whole idea revolves around reducing the waiting times for wagon retrofitting as much as possible. With rolling stock prepared for conversion, the pop-up workshops will facilitate the installation of DAC equipment since the retrofitting will also take place where or near the wagons’ operation sites with no need to move them to a central workshop.

“Thanks to these mobile workshop tents, freight wagons can quickly be equipped with the new technology near where they are used, for example, at industrial customers’ sites. The aim is to create temporary additional retrofitting capacity and shorten the time wagons are unavailable to customers,” commented DB.

With the introduction of DAC, European wagons will operate using two different systems for a transitional period-the DAC and the traditional screw coupler system. Converting wagons to DAC is not a big hurdle; however, the process takes place in two different stages to ensure efficiency. DB explains that, at least in its case, it will ensure that all of its wagons are pre-equipped for the DAC system during regular maintenance visits. This process will complete around the first half of 2023. After that, the company will avoid the mass DAC conversion of rolling stock in central maintenance centres. In contrast, wagons will retrofit to DAC in one of the 150 pop-up test workshops found around Germany.

“Freight wagons are first pre-equipped during routine visits to the maintenance depot. Once wagons are DAC-ready, it takes just a few steps to finish retrofitting them at a pop-up workshop. The conversion works similar to Plug & Play,” said the company. “We can convert an analogue freight wagon into a smart, digital one in just a few steps. The mobile workshops will allow us to make thousands of freight wagons fit for the digital future in a short period”, added Sigrid Nikutta, DB board member for freight transport.

In early 2022, the first DAC train officially started its pilot trip crossing several European countries, including Germany, Austria and Switzerland. The system got tested in different driving situations that would be possible along the route, including steep inclines, sharper curves or diverse climatic conditions.

For instance, in Austria, the DAC train spent an entire weekend at a standstill under winter weather conditions and sub-zero temperatures to check how the equipment would react. “The wagons were uncoupled and left standing, and the results were very positive. Fortunately, the coupling mechanism worked without a problem”, said Rail Cargo Group back then.