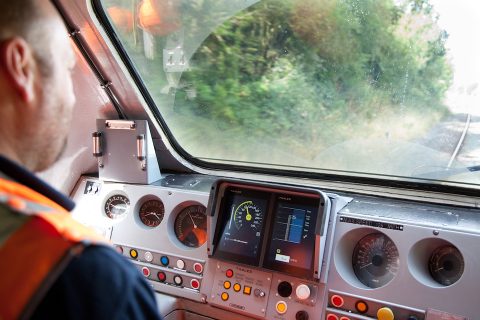 Network Rail has successfully completed European Train Control System testing on the power cars of its New Measurement Train. The yellow-liveried engineering inspection train, adapted from a redundant formation of the diesel-powered ‘High Speed Train’, is hauled by a pair of power cars, designated class 43. In its original formation, the HST design holds the record for the fastest diesel-powered train produced.

The digital upgrade to the East Coast Main Line has taken a significant step forward. A milestone has been achieved with the successful completion of testing with digital signalling for Class 43 power cars. European Train Control System (ETCS) in cab signalling technology enables a more reliable service with reduced delays, improved safety and reduced costs and emissions through the removal of lineside infrastructure. The installation and testing forms part of the Government funded East Coast Digital Programme (ECDP).

Porterbrook, the lead Rolling Stock leasing company (ROSCO) for the Class 43 power cars, managed the project on behalf of the rail industry under instruction from Network Rail. Engineering specialists Thales was awarded the contract to carry out the ‘First in Class’ design and fitment project, and the completion of testing at RIDC marks the first time that the Thales On-Board System has been successfully fitted in the UK.

Several other ETCS projects are underway or completed in continental Europe, including those in the Czech Republic and Denmark. In the UK, the testing process at RIDC involved several days of running and builds on an initial phase of lab testing to integrate and prove the technology once installed onboard the class 43 power cars. The physical testing at RIDC proves that the component parts of the ETCS technology (train, trackside, radio block centre) and the train itself all work together in real life conditions.

With around 700 vehicles needing to be prepared for the East Coast Digital Programme, the First in Class (FiC) testing programme at RIDC over the next two years will involve around twenty-five classes of passenger and freight units. “The ability to test vehicles at RIDC is a corner stone for the delivery and roll out of ETCS across the network”, said Toufic Machnouk, Network Rail’s Director, Industry Partnership for Digital Railway. “This allows the train to be tested and certified following the fitment of new safety critical control technology without disrupting the operational railway.”

“The successful testing of the Thales ETCS system with the trackside infrastructure at RIDC represents a major milestone for the Class 43 project and is the culmination of a brilliant collaborative effort from the team”, said Tank Porteous, Programme Director at Thales. “The East Coast Digital Programme transforms the railway to the benefit of its users. Many other companies across the railway have supported the ETCS project, including Ricardo which carried out the integration design for all the Class 43 build types, Yellow Rail which carried out the installation work on behalf of Thales, and Loram UK which maintains the Class 43 fleet.”