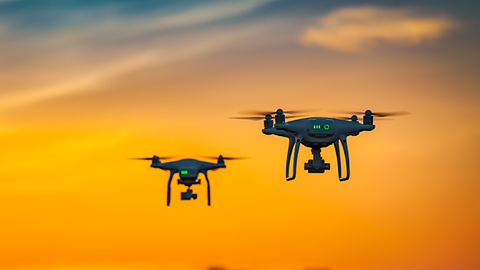 French technology group Thales is developing a concept of special drones for Automatic Train Operation (ATO). The air vehicles will be equipped with advanced optronics, infra-red sensors and other integrating leading technologies. The drones will fly ahead of the autonomous trains monitoring the tracks and switches.

The concept of drones for ATO was named as Raiдbots. “We are currently working on the concept of Railbots, the rail drones of the future. They will be moving on the track ahead of the train, and programmed to run autonomously,” said Pierre-Antoine Benatar, Marketing Manager for Thales’ Transportation Activities. They will gather and transfer the information about the track conditions.

The unmanned aerial vehicles will work as a co-pilot of the autonomous trains and will help them to react faster on any problem or obstacle. “Be it aerial or track-bound, drones could truly become a critical part of rail safety when operators move towards autonomy in the future, and Thales is ready and when you add our expertise in air and rail traffic management to our capabilities in optronics, sensors, and artificial intelligence, it is clear that we are the preferred partner for operators who want to assure the best for their rail networks’ future,” noted the Thales’ manager.

If Thales will successfully accomplish its project, ATO will become the new segment of the railway industry for drones. Currently, air vehicles are used mostly by infrastructure managers in monitoring the track condition and allow them to reduce their costs for maintenance. “The more regularly railway infrastructures can be inspected, the more railway safety, reliability and on-time performance will be improved. Costs would be cut and operations would be more efficient across the board,” Pierre-Antoine Benatar explained.

Also, the drones are used to monitor the high-voltage electrical lines. “They could do precisely the same thing to inspect railway catenary lines and other vital aspects of rail infrastructure such as the alignment of tracks and switching points,” said Pierre-Antoine Benatar.

Talking for a crowded country like the Netherlands here.. we probably won’t need drones because there is always the previous train in front of you which can relay all issues it encounters. Thence we will only need inspection once before start of service.